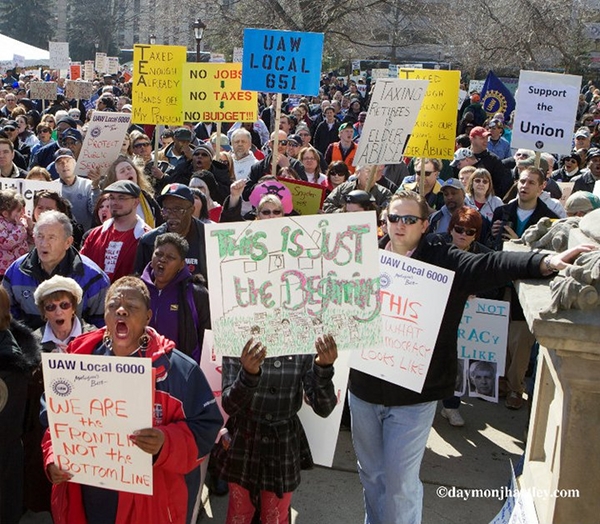 Protesters demonstrate against Governor Rick Snyder, the Emergency Financial Manager and Right To Work at Cobo hall in Detroit. Photo/daymonJhartley.com

DETROIT—As if we’d been soaked in a bucket of ice cold water, Detroiters and residents of surrounding communities have been shaken and shocked as we witness first-hand what a total State takeover looks like.  Knowing that this epic moment was coming, still the reality of what it feels like to have your right to vote stripped away is unlike anything many of us have ever experienced. Elders from the South discuss what their battle for the right to vote was about, and how they too are surprised at this newest attack against working people by desperate corporations in collusion with elected officials.

Detroit is on the auction block, its assets for sale to the lowest bidder. To some, it appears to be a good thing to bring an Emergency Financial Manager (EFM) in to “straighten out” the financial situation the city is in. To others, the horrible truth of what is happening is unfolding before our eyes, and we are concerned about the implications. This financial crisis is exploding nationwide.  The great American exodus of recent years is underway, with families searching the country for jobs.  Communities once prosperous with high employment are teetering on the brink of financial collapse, as they are being separated from high-paying jobs in droves, at the hands of the new world boss, “Master Technology.”  Millions of American workers are separated from jobs and are on the move, taking families, pets, possessions and their pride with them in an effort to somehow start all over again.

Michigan has sustained one half of all the manufacturing job losses in the country – a burden no one state can absorb.The Governor has taken the bold and lawless step of hiring an overseer to manage the “City fire sale”, under the guise of managing the crisis.  We have many wonderful municipal holdings that are being “eyed”, that we fear will soon be snatched away forever. Our beloved paradise called “Belle Isle” – a place where families can take their children and walk through wooded areas, watch deer and ducks, walk by quiet ponds dotted with Mr. and Mrs. Swan and their babies, and stroll down pathways during hot summers – is on the list.  Art Deco buildings decorated by artists of every genre are on the list.  So are examples of the “Spirit of Detroit”, labor movement replicas, religious institutional beginnings, and the many stories of freedom walkers.  All this misery to cover up the Great Theft!  Detroit is a border city and the site of international commerce. From Canada, resources can be transferred to Detroit, on to the Great Lakes, and to ports in all directions.

Once the EFM makes it clear that he is in charge, that the resident’s right to vote is dead, and that he has the authority to sell what he deems necessary, the crisis will come full circle.  The jewel in the crown is the revenue-producing water department, because from there only the oceans stand in the way of mega-profits to be made.  The courts are lining up on the side of these corporate pirates, as what is lawful is being re-defined.  “Boss Technology” says it is “legal” to destroy the lives of workers, and the courts say “OK!!” “Boss Technology” says it is alright to destroy public education, and the courts say “OK!!”  We are being pushed to the brink, so now is the time to determine how much more can we take.  Get busy living, or get busy dying, Detroit.  You get what you organize to take.