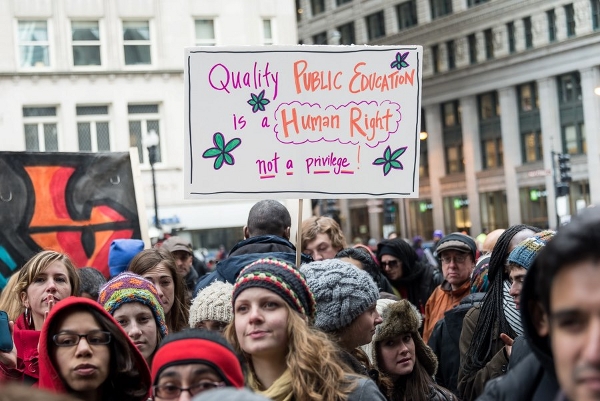 Rally and March to Stop School Closings in Chicago. (See article on page 7 about the corporate takeover of education.) Photo/Brett Jelinek

In a recent movie, a billionaire approached a man and offered him a million dollars to spend the night with his wife. The man angrily retorted, “She is not for sale.” The billionaire smirked, “Everything is for sale.” Offensive? Most truths are.

A recent article in the Wall Street Journal noted that we, as a nation, have gone from a market economy to a market society. That is to say we have gone from an economy based on market laws unfettered by social morality to a commoditized society unrestricted by any sense of social responsibility.  Everything has or is becoming a commodity and for sale. Armies, police, schools, prisons, parks and all other public properties are going through the process of privatization. In this time of corporate take-over, private property and social welfare are incompatible. One can exist only at the expense of the other.

Every economic process is preceded and guided by a political process. In the past, the wide spread ownership of small farms and businesses demanded consensus—thus “American Democracy” developed alongside slavery and genocide. Today, concentrated wealth and political power demand they be freed from the nuisance of consensus. With nowhere to expand, corporate power is forced to turn inward, to transform all public property into their private domain.

The commodification of state power only reflects the “For Sale” sign on the political process.  When corporations have more rights than human beings, when bought and paid for Supreme Court justices pick presidents contrary to popular votes, when the right to trial by peers is set aside, when the President declares he has the right to murder without due process—you no longer have even consensual democracy. It is fascism and it politically reflects the demands of the corporate economy.

It would be simple—as so many on the left have done—to say we were betrayed by Obama. The reality is that no political law can overcome an economic law. Be it Bush or Obama, they must create political processes that conform to the economic motion.

Capital is at the end of its existence. It is not the first system to come to an end and be replaced. The new more efficient means of production—electronics—is incompatible with the wage-labor value producing system of private property. Like any dying thing—capitalism fights to stay alive. It can only stay alive at the expense of the people.

We are in for a fight for the ecology, for civilization and for our very lives. We cannot win this fight if we only fight against the fascists. We must fight for something.  That something is the orderly world of peace and prosperity made possible by the new electronic means of production.