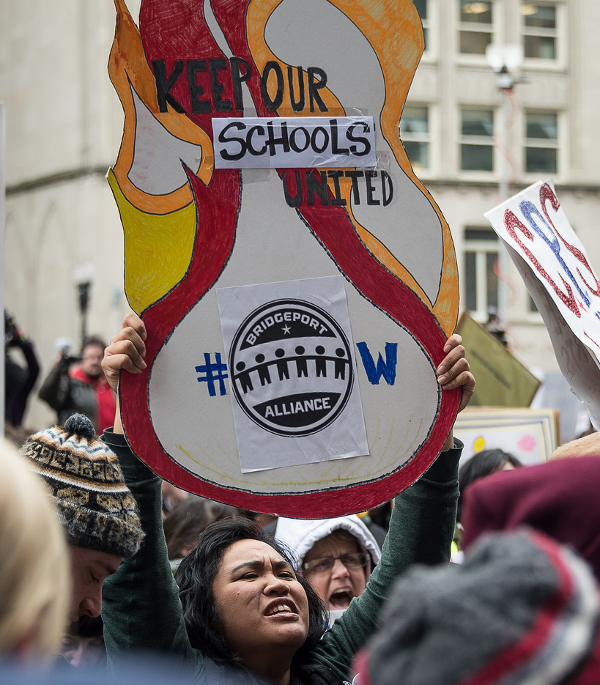 ATLANTA, GA—The public school system in America is being gradually eliminated. Is it because it is the last area whereby corporations can create for-profit schools and the fact that our minority students have become the majority in the schools?Is it a war on people of color and of poverty?

On January 2, 2001 President George Bush signed the No Child Left Behind (NCLB) legislation that testing and accountability would be the criteria to measure if students and whether schools and/or school districts would be granted bonuses or suffer punishment such as the closure of “failing” schools. The high stakes testing and the top-down educational mandates are not meeting the needs of of the majority of the students—Hispanic and Black. This becomes the route from school to prison pipeline.

In the op-ed in the Bellingham (WA) Herald on March 23, Lorraine Kasprisin, editor of the Journal of Educational Controversy, writes, “The school-to-prison pipeline stands as a direct contradiction to the vision of the public school as an institution for promoting and sustaining a democratic republic.” She denotes that the data from the ED’s Office for Civil Rights “indicate that over three million students are suspended and more than 100,000 students are expelled each year.” She documents examples of zero tolerance policies, overuse of school discipline and juvenile court referrals all stemming from the pressures and abuse from the high-stakes testing environment as causes. She is an advocate for the student’s right to a quality education, freedom from discrimination and due process.

Many school systems and schools are taken over by the states or local governments under the pretense that they are “failing” systems or schools or that they are otherwise dysfunctional. Georgia Governor Nathan Deal recently removed six of the nine DeKalb County, Georgia School Board members (the three remaining members were just elected). The Southern Association of Colleges and Schools (SACS) is the agency that monitors accreditation but actually only monitors management not student achievement. It considered the DeKalb County Board members dysfunctional and put it on probation. The Atlanta and Clayton County School Systems suffered from this same situation a few years ago. SACS plays a part in the move to privatize the public school systems. During the legislative session Governor Deal asked the state legislators to give the state more control to intervene over struggling school boards.

Other examples of “take-overs “ of school systems have occurred in Prince George, County, Maryland, by the County Executive; New Jersey Governor Chris Christie’s take-over of the Camden, NJ, system; Chicago Mayor Rahm Emanual plans to close 53 schools and in Michigan, emergency manager Roy Roberts has announced that he will fire the superintendent that the Detroit school board hired.There are many more cases of uprooting the democratic right of all—one man, one vote—which the Voting Rights Act of 1964 reflects.

Rich Gibson, an advocate for Education for Social Justice, Democracy and Equality, in response to this destruction of public education states: “the education agenda is a war agenda” (war on working people; war on poor people; war on people of color; war on youth; war on schools, students, teachers, and the community).