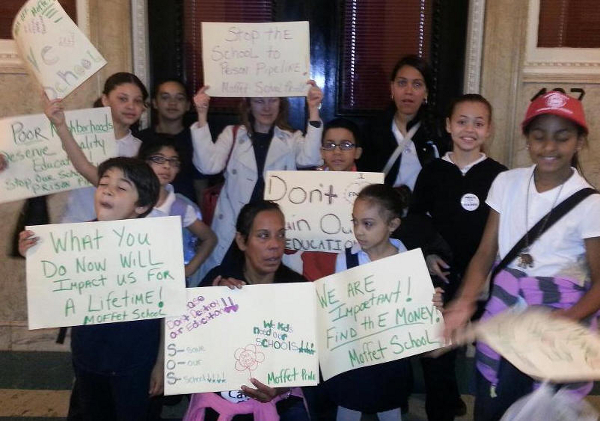 Philadelphia families protesting cuts to education were among those participating in the Operation Green Jobs march. Photo/Cheri Honkala

On May 18, a group of marchers set out from Philadelphia, PA to march on the US Chamber of Commerce in Washington, DC.

“What are the most dire issues we face?” asked march organizers. “If you’re like most Americans, you’d probably say the climate crisis and the jobs crisis. So why is Washington so obsessed with budget cuts and fossil fuels? Don’t ask members of Congress who have been purchased by corporate lobbyists, ask the one with the receipts: the U.S. Chamber of Commerce. We’re leading a march of the long-term unemployed from Philadelphia, PA to Washington, DC directly to the Chamber’s front door.

“Even while the U.S. Chamber of Commerce has the word JOBS hung on the front of their building, they’ve been working overtime to lobby for job-killing austerity policies that punish the poor to cushion the rich. They’ve been spending millions to bring about the approval of the catastrophic Keystone XL pipeline while remaining silent on green energy programs that would save the climate and create jobs. So from May 18th to May 24th, a group of Americans who have been the hardest hit by the recession will march on the U.S. Chamber of Commerce, holding them accountable for buying off Congress. Among those leading this march is Cheri Honkala, the 2012 Green Party vice-presidential nominee and a member of the Green Shadow Cabinet.”

The Green Shadow Cabinet was organized on Earth Day, April 22. According to Jill Stein and Cheri Honkala, its purpose is “to amplify the voices of resistance and transformation” and “debunk the exploitative policies of duopoly, provide timely response to current events, and raise the bar for just, sustainable solutions to the crises we face.”

“We are honored to have within the Cabinet leading advocates in their fields who are independent of the corporate political duopoly and who oppose a government dominated by the interests of big business and the wealthy,” explained Stein and Honkala. “The Cabinet will help unite the principled opposition for greater strength and impact than we can achieve as isolated issue advocates. It will bring a broad spectrum of activists into mutual collaboration, and demonstrate our capacity to govern – as Greens and independent allies.”

Every new sequester, every new pipeline, every gas company subsidy, every foreclosure and new school closure is another sign that Congress has succumbed to naked corporate rule. Every march like this one is living proof that (unlike Congress) the people cannot and will not submit to corporate dictatorship. We are on a collision course. Society must take over these corporations, or these corporations will take over our society.