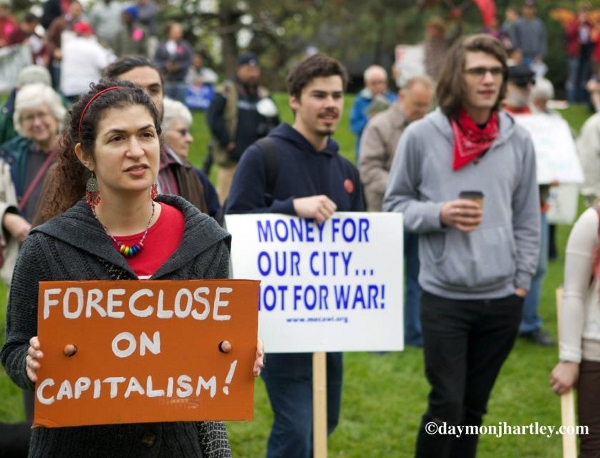 Protest on May Day in Detroit, Michigan.
Photo/Daymonjhartley.com

World War III is beginning. It is starting in the Middle East. The war being waged against Syria by the US and its allies is in fact a proxy war between the US on the one hand and Russia and China on the other. If we don’t act, the world war that is developing could well destroy humanity and the earth. The American people have the key role to play in stopping this war.

The various wars and interventions by the US and its allies across North Africa, the Middle East and Central Asia, and the repositioning of US forces in the Pacific, is about encircling Russia and especially China militarily. It’s about disrupting markets for Russian and Chinese goods and controlling China’s energy supply. It’s about capturing markets for US corporations.

If the MidEast struggle continues to escalate, it will eventually lead to a nuclear war that will kill hundreds of millions and perhaps destroy the world.

This is not a question of which country to side with. No country is the “good guy” in this process. We must take the side of humanity against capitalism, against the greed and lust for power that would destroy humanity and the world.

According to the Stockholm International Peace Research Institute, in 2011—the most recent year available—the United States led the world in military spending at $711 billion, or 41 percent of the world total and more than the next 12 nations combined. The US investment in military spending not only helps fuel the drive toward war, it consumes resources we need for feeding people, ending poverty, providing health care and educating our people.
The American people can stop the coming world war. We can take our country away from the corporations and build a cooperative society. This is not a choice for the people, but a necessity, given that technology is wiping out jobs and markets and thus wiping out the foundation of capitalism. If we try to continue with capitalism and private property, then growing poverty, fascism, and another world war are inevitable.

If we in America take the political power away from the corporations and turn their private property into public property, we can build a cooperative society. By doing this, we can not only guarantee that our economic needs are met, we could literally save the world. Our daily struggles should be guided by the understanding that we are fighting for a cooperative society, and we should demand that our country’s resources be diverted from war to meeting our people’s basic needs. The future is up to us.

One thought on “We can prevent the coming world war”