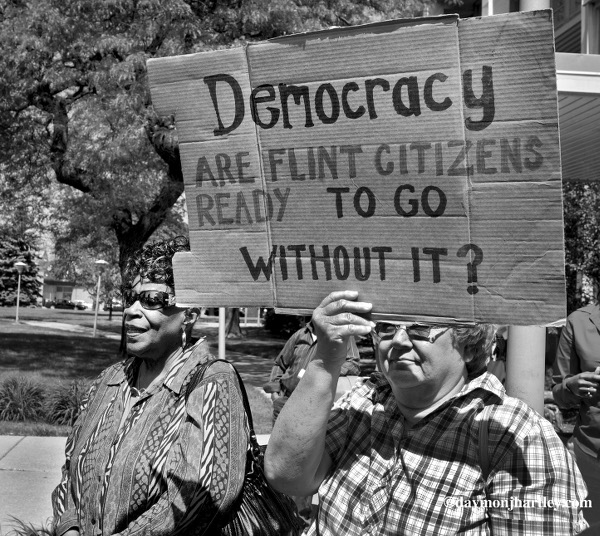 Protest for an end to Emergency Manager “dictatorship” law in Flint and across the state. People rally on the lawn of Flint’s City Hall.
PHOTO/DAYMONJHARTLEY.COM

Flint, MI—Recent events here underscore the depth and breath of dictatorship as outlined under Michigan’s Emergency Manager Law. These “Managers” are dispatched to a city or Township by the Governor replacing the power of both  Mayor and City Council. Their power allows them to sell public assets, shred union contracts and more. Despite having held recent City Council elections, these Councilpersons serve at the behest of Flint’s  Emergency Manager, Darnell Earley. The December City Council meeting, for instance, was cancelled by the Emergency Manager.

The recent arrest of newly elected Councilman Eric Mays for drunk driving launched a feeding frenzy by local and national media (CNN). Emergency Manager Darnell Earley called for the resignation of Councilman Mays before charges were even filed! When he (Mays) refused to resign, Darnell Earley issued an Executive Order stripping Councilman Mays of his already diminished powers. The order not only deprives the Councilman of an opportunity to address constituents’ complaints (calls from 1st Ward are to be handled by the City Clerk), but prohibits him from speaking to staff or using the City Hall garage. Furthermore, he cannot set foot on City Hall property other than from 8-5:00 PM or for City Council meetings. His communication with the Emergency Manager is limited to emails only.

Last year, Michigan State Representative Bob Genetski of Allegan County who happens to be a white Republican, was charged and convicted of drunk driving with NO calls for his resignation or public censure by the Michigan State legislature. Flint residents from all around the city (particularly his predominately African American ward) are crying foul, and are standing up for the outspoken activist Mays and resisting ever more double standards.

Clearly Councilman Mays must accept responsibility for his actions and the courts as well as voters in the 1st Ward will see to it that it happens. On the other hand, it’s no secret that he has been a vocal opponent of the Emergency Manager Law—along with thousands and thousands of voters across the State of Michigan who voted to Repeal PA 4, the current law’s predecessor. With all this nonsense going on, we the citizens of the city of Flint have likewise been sent a message.

The first message is that the original Emergency Manager law, signed by Governor Snyder, was driven by the perception that Black elected officials are dysfunctional, incompetent, and corrupt, and cannot be trusted to manage the affairs of the city. This narrative helps to explain, in part, why despite comprising 13% of Michigan’s population, over 50% of African Americans live under Emergency Managers. Under this scenario, the state hopes to keep the city of Flint under state control for as long as they want, playing the Race card, while preparing to take over  even more cities, townships, and school districts.

The second message is to the rest of the Flint City Council, using Councilman Mays as an example. Go along with Emergency Manager decisions, no matter how much these decisions impose suffering are contrary to the will of the people, or you will suffer the same fate as Councilman Mays.

The assault on democracy is alive and well. What, then, will be our next move??