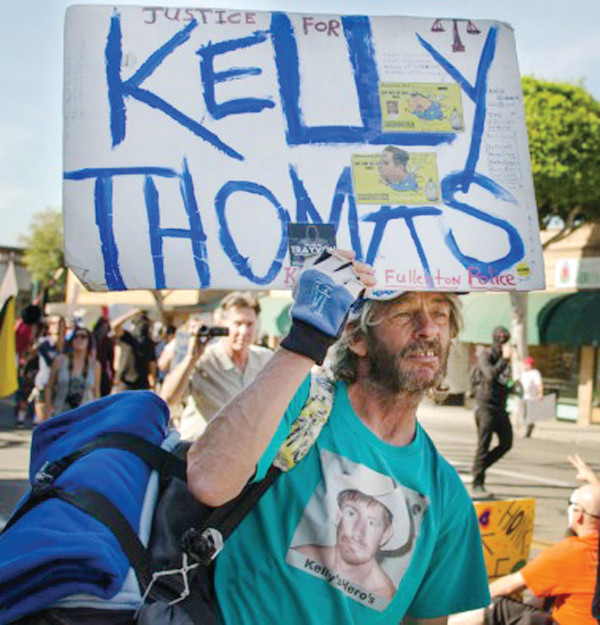 A march to protest the not guilty verdict of two Fullerton, CA police officers after their acquittal in the Kelly Thomas trial. Thomas was a homeless, mentally ill man who was murdered by police. A video recording showed the deadly beating.
PHOTO/ETHAN HAWKES, DAILY TITAN

LOS ANGELES — In January 2014, two Fullerton police offers were acquitted of charges on murdering Kelly Thomas, despite video evidence showing that Thomas was not a physical threat to them.  Kelly Thomas was living on the streets and was suffering from Schizophrenia and was refusing any medical treatment at the time when he was killed.

While most victims of police brutality are people of color, an alarming percentage of people who are killed by police suffer from some form of mental illness.  Forty-two percent of people shot by police since 2000 and fifty-eight percent of those who died from their injuries had mental health problems.

The story of Kelly Thomas really hit close to home for me as a Mom who raised an adult son who has struggled with mental illness issues.  I raised him knowing that the likelihood of him being killed by a cop is much higher than average.  Statistically, white males are far less likely to be killed by police than men of color.  Eyes with color didn’t protect Kelly Thomas or the hundreds of other white men who deal with mental illness from the brutality of cops who are not held accountable for their murderous actions.  My son doesn’t know that his Autism makes him vulnerable to police abuse.

One day I came home and went into a panic when I found that my son, Mat, was not there.  Even though I knew exactly where he was likely to be, I was terrified of what have might have happened on his way there.  What if a cop stopped him and gave him multiple orders and he became confused not knowing which one to follow?  Would my son be the next statistic?  I immediately walked in the direction of where he would have gone to get a taco or an energy drink.  I found him and he asked me why I met up with him.  I said I was worried.  He didn’t leave a note.  He said, “Mom, I’m a grown adult. This is not appropriate.”  He was right.  I completely over reacted.  He is perfectly capable of going out and buying a snack.

Raising a son with Autism is really enough struggle for one mom.  My adult son is able to function just fine on his own as I raised him well.  I shouldn’t have to worry about him anymore.

I would like to live in a world where people like Kelly Thomas, my son. Mat, and all people will be safe to go out of the house and live life safe from police brutality.

Patti Beers is a citizen journalist who was arrested by police in riot gear at the protest after the acquittal of the police officers who murdered Kelly Thomas.