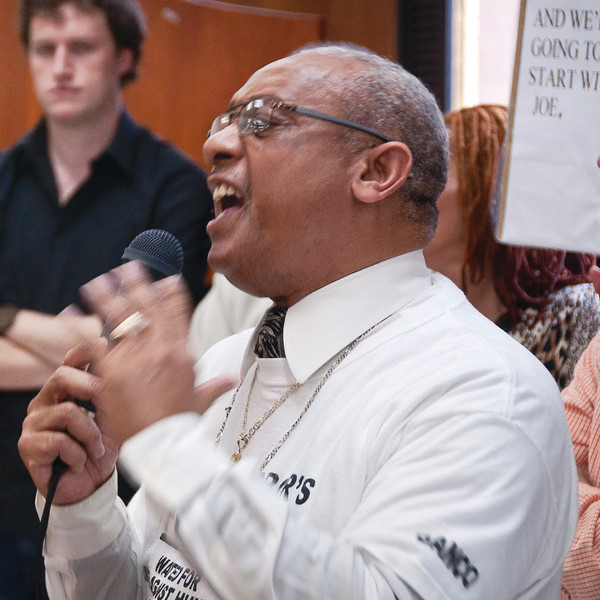 Rev. Pinkney speaking at a protest against the city’s Emergency Manager
PHOTO/BRETT JELINEK

BENTON HARBOR, MI —The new face of Jim Crow is all across the county of Berrien in Michigan. The prosecutor, sheriff, County Clerk’s Office and the Mayor, James Hightower of Benton Harbor, are making it harder and harder for African-Americans to exercise their fundamental right to sign a recall petition and to vote.

In Benton Harbor, an effort has been going on to recall the Mayor and some city council members. Community members say the measures used to stop this effort include intimidation, harassment, threatening and kicking in doors of those who signed the recall petition. The message is clear: Do not recall anybody we the one percent put in office or you will go to jail. The whole city is under siege today. (This includes economic siege. The bankrupt city claims they are out of debt but they just borrowed $2.3 millions to pay creditors.)

Voter suppression is a strategy to influence the outcome of an election by discouraging or preventing people from exercising their right to sign a petition for a recall of an elected official. Voting rights are attacked under the pretext of preventing “voter fraud.” The rights of citizens of Berrien County or any other county or state to vote or sign a petition should not be denied or abridged by government. The Fifteenth Amendment to the United States Constitution prohibits the federal and state governments from denying a citizen the right to vote based on that citizen’s “race, color, or previous condition of servitude”.

I want everybody to know the democracy in Benton Harbor, and throughout the country, is being destroyed. It is being destroyed because democracy is incompatible with a system that breeds wars for profit and the concentration of wealth and power in the hands of a tiny group of billionaires. No section of this ruling elite will defend democratic rights. That task falls to the America’s working class.

It is not one thing, it’s everything. We are now under the power of the corporations, elites and dictators. Do not allow the corrupt government to suppress our voting rights. We must organize and demonstrate that we have rights. We must fight for a new world where those rights are achieved.