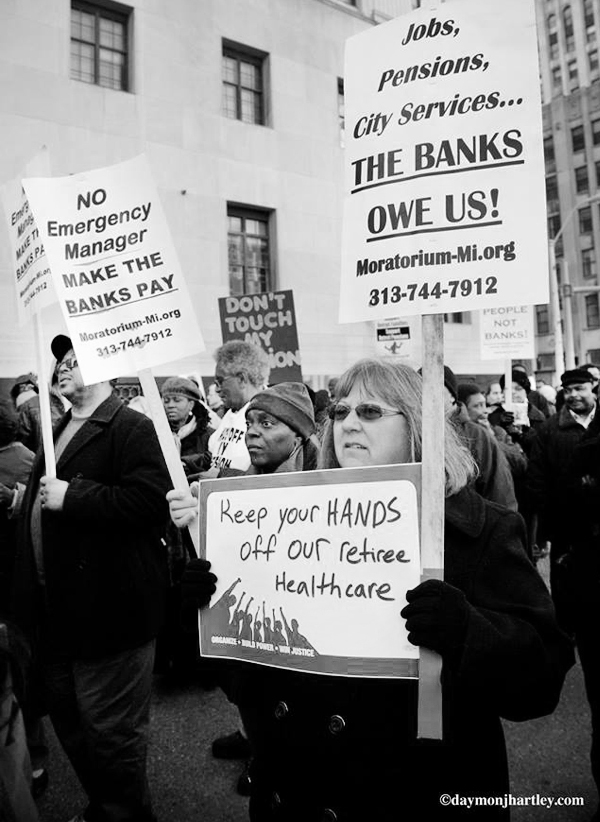 Demonstrators protest the Detroit bankruptcy at the Federal courthouse in the city.
PHOTO/DAYMONHARTLEY.COM

DETROIT — ‘When severe cuts to retiree health care are included, former city workers are likely to recover no more than about 30% of what the city says they are owed. The city proposed paying less than one-third of its retiree health-care liabilities to a newly created trust fund over 20 years.’  (Wall Street Journal 2/21/14).
No Jobs, No City
The healthcare of all of us, not just auto retirees is being separated from production to increase corporate profits. We are in a period of economic transformation. Machines that made us more productive are being replaced by machines that can produce for our needs with little or no human labor involved.

The population fell by 61%, manufacturing jobs fell by 91% and income from manufacturing wages fell from $10 billion to $775 million (a drop of 92%) and the unemployment rate increased by 349%.

In 1948, there were 3606 wholesale warehouses employing 45,079 people earning $1.5 billion in wages.  In 2002, there were 611 wholesale warehouses employing 10,153 people earning $400 million in wages.  This is a decline in warehouses of 83%, a decline in employees of 78%, and a decline in wages of 73%.
Corporate Solution
The basis of our social relationship—a job, and the benefits related to it—are disappearing.
Medicare For All was rejected by Congress and the Administration in favor of the Affordable Care Act (ACA).
About 23,000 City of Detroit retirees, with pensions averaging about $19,000 a year, will have their healthcare slashed by 85%.  This is what the state government, in the person of Emergency Manager Kevyn Orr, is proposing to the federal bankruptcy court.

Just as in the case of the UAW Voluntary Employee Beneficiaries Association (VEBA) the city is using an accounting rule to calculate an imaginary liability of $6 billion to create a $500 million underfunded VEBA isolated from city revenues leaving retiree healthcare dependent on penny stocks and junk bonds.