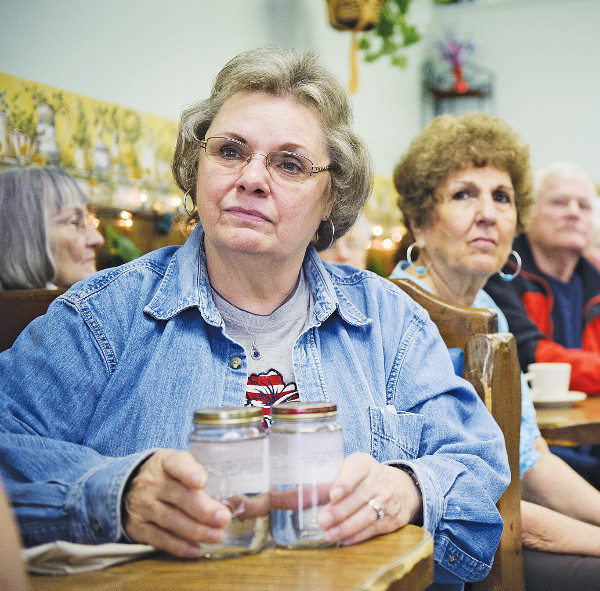 Gail Rectenwald sits with samples of tainted water from her well to support installation of new water lines in the area.
PHOTO/ JAMES FASSINGER

CHICAGO — There are two things you cannot get in Charleston, West Virginia today; guaranteed safe drinking water from the tap and straight answers from officials about the situation. That is pretty much how it was when I lived in the Kanawha Valley 25 years ago when it came to coal related disasters, chemical leaks, spills, and intentional dumping.

I have stayed in touch by phone, recently getting some observations. I spoke to my old friend who lives and works a short distance from the site of the recent chemical spill that contaminated water for 300,000. Nobody he knows will drink the water from the tap. When it was declared safe he tried showering, broke out in a rash, and developed flu systems. The children in the family bathe with store bought water. The public officials who declared it safe refuse to demonstrate by drinking it.

State Senator and multimillionaire heir to a fossil fuel fortune, Jay Rockefeller, won’t drink it and suggests nobody should believe or trust the officials. Having been both governor and state senator over the last 30 years, he should know.

Charleston is a relatively small city and probably going to get smaller. Like many southern river towns there seems to be a long-standing “good ol’ boy” network of frat types who have the reins of power. Many of them like the Freedom Industries owners and managers play fast and loose with safety regulations. They had enough clout to avoid any inspection of their facility since 1991. Yet those types are small fry compared to the chemical and coal giant corporations who have run West Virginia for over 100 years. Manipulating public opinion with threats of job loss and owning elected officials is the way they do business. What smell? Do you smell something? We don’t smell anything.

Water is still running foul and discolored in many cases. The water company said everyone would get 1000 gallons free—then charged their bill anyway. Criminals involved can’t seem to be found. Hope that stars can come to the rescue like West Virginia natives Brad Paisley and Jennifer Gardner have faded. Justice is going down the drain.
The people can and will resist as best they can but we need to unite the nation against the corporate poisoners trying to strip regulation further. We need to take over these deadly operations, or in many cases close them down. The engineering and technology for safe plentiful energy exists today.  A place like West Virginia  could be almost heaven as the song says. That will require a huge political effort in the interest of the majority to take away the power over air and water from the corporate exploiters.