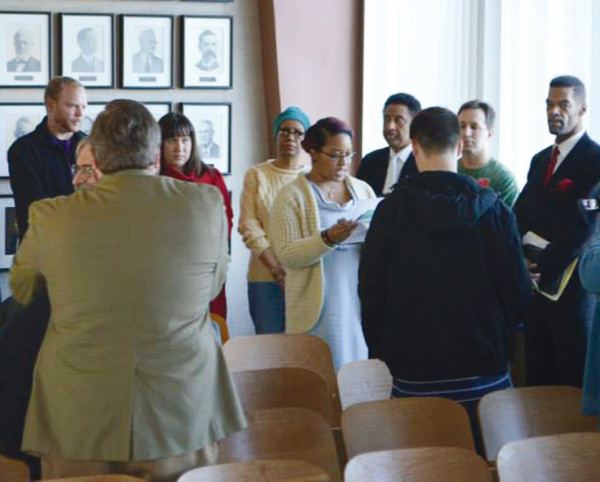 Supporters surround Nayyirah Shariff as she presents a rebuttal to the Mayor’s ‘State of the City Address.’
PHOTO/STEPHANIE HACKNEY

FLINT, MI — On March 3, 2014, activists from the Democracy Defense League called out Flint’s Emergency Manager, Darnell Earley, and Mayor Dayne Walling, by reading a rebuttal statement after the mayor’s annual ‘State of the City Address.’

In the statement, the group pointed out the audacity of the mayor going through his charter mandated role while the office of the Ombudsman, a position mandated in Flint’s charter as the people’s watchdog, has been eliminated by Flint’s Emergency Manager.

The statement juxtaposes tax cuts and abatements given to oligarchs such as Uptown Reinvestment Corporation and their shell corporations with increased fees, rate hikes, and millages paid by Flint residents. So far the emergency manager has imposed illegal street light fees, garbage fees, water and sewer fee increases, and raised the renter water deposit fee to $465. The Emergency Manager has given Uptown Reinvestment Corporation $880,000 in Community Development Block Grant dollars to demolish a building Uptown illegally purchased for $1.

Today’s speech is a distraction . . .  The real story is between the lines.  The real rulers of Flint who meet behind closed doors with (Gov.) Rick Snyder’s donors just need a figurehead, and maybe someone to take the heat.
Breaking promises frees up a lot of cash for those corporations.  They play with your money just like the banks did.  First came hikes in water and sewer fees.  The Emergency Manager said it was to cover the cost of water, and Walling didn’t have a speech for you then.  Turns out, they want to use it as a tax to plug the deficit that Rick Snyder’s buddies created.

. . . and a demeaning and insulting “directive” singling out Councilman Mays that attempts to “put him in his place” by exerting illegitimate executive power and authority at the expense of the residents he was elected to represent.

A rigged, lucrative game for oligarchs is not a democracy . . .

Flint’s democracy may be dead, but the people of Flint have worked miracles before.

The full statement can be read at: