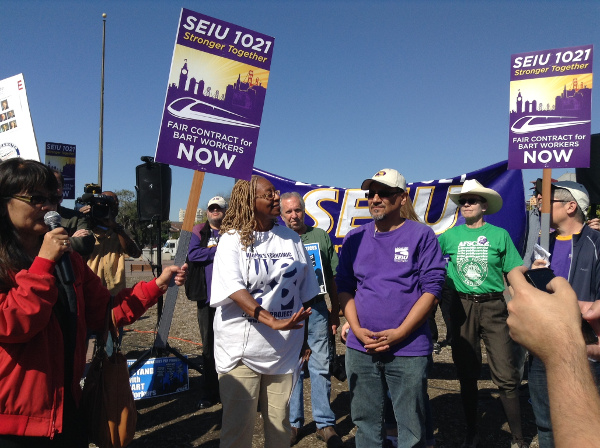 The struggle to hold technology companies accountable becomes clearer and clearer as organizations like CHAM and Silicon Valley De-Bug in the South Bay, WEAP and SEIU 1021 in the East Bay and San Francisco, work to hold Goliath’s like Apple, Twitter and Goldman Sachs accountable for their tax revenue, debt schemes and direct thievery of public property. San Jose, a place once known as the safest city in America is now home to the largest Tent City in the country, right up the street from Cisco and Ebay’s campuses.

In the East Bay, years of assault on the Safety Net and increased attacks on public workers continues to take their toll, while unionized and non-unionized workers alike struggle to fight for their human rights. Last year, transportation workers took on management and money in a direct clash that resulted in the first transportation works strike in decades. And while the unfortunate and unnecessary death of two workers forced management to concede to demands, within a few weeks management was back up to their old tricks, trying to pull out of their agreement on a technicality. Meanwhile, the state legislature continues to shape a law that would not only contest transportation workers’ right to strike, but would make reporting “strike advocates” and trouble makers to state authorities mandatory.

In San Francisco, the workers of SEIU 1021, the employees and residents of public housing, and the students, faculty and administration of community colleges all face the increasingly menacing and unrelenting face of the enemy of displacement. San Francisco will see struggles the likes of which it has never seen, and a city once held as a bastion of liberal thought and progressive politics could soon be the poster child for a West Coast city completely owned and operated by private interests. The workers of SEIU 1021, however, have drawn a line in the sand. They are making clear demands for something beyond a minimum wage, They are calling for a living wage. They are demanding good, quality full time jobs, safety at work, the end of racism and discrimination of all types and the end of corporate giveaways from fat cats who already have everything.

Whether it is Chevron in Richmond or Twitter in San Francisco, Goldman Sachs in Oakland, Apple in San Jose, or Google extending it’s tentacles into every corner of the “Silicon Valley Bay,” the one percent of this region have played their card. The call has been sounded with the move to the complete privatization of all public infrastructure. Our response must be class based, visionary and organized. Now is the time for revolutionaries to stand and provide the vision, leadership and strategy needed to point the way forward.