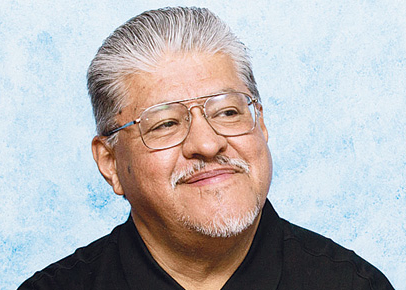 Luis J. Rodriguez. The slogan of the Rodriguez for California Governor Campaign is “Imagine a New California.”
PHOTO/MICHAEL CENTENO

People’s Tribune: Luis, what is your program to eliminate poverty?

Luis J. Rodriguez: California is the richest state in the nation and the 8th largest economy in the world. Yet it has the worse poverty rate of any state—almost 24 percent. There are close to 9 million poor people, some three million since Jerry Brown has been governor. Why?

“Income inequality” is endemic to the capitalist system. Whether run by Democrats or Republicans, the state is beholden to the wealthy and powerful, who buy up large parcels of land, tear up homes, poison our land, water and air. California is the only place on the planet that does not charge oil companies for “severing” the oil from the land. This alone would result in billions of dollars.

Overhauling the almost $8 billion dollar prison system—possibly the largest state-sponsored poor people’s housing—will also provide funds. It’s time for the poor and working class to organize in its interests, to make its own policies that ensure everyone can thrive. My slogan is, “Imagine a New California.” Then we organize to make this happen.

PT: How can the 99% fight and get free quality education and health care for everyone?

LJR: Along with material poverty there is the poverty of access. Education and healthcare are necessities— and everyone should have direct and free access to them. Teachers and health care professionals should be adequately trained and compensated. The privatization of these necessities makes them costlier and limited. We must align resources to social needs— everyone should have adequate food, clothing, shelter, and also education and healthcare. This is a public charge.

PT: What is your position on immigration?

LJR: All residents, whether they have documents or not, should be given the same rights and benefits as anyone else. And I would do whatever possible to end deportations. We need to look at the impact of runaway industries, cheap labor markets, and policies like the North American Free Trade Act that have forced massive U.S. mechanized agribusinesses to compete with poor household or community milpas in Mexico or Central America. This drives more people away from their homes and countries. The Green Party of California’s program says we are all interconnected—what happens in California can be a revolutionary example for others. At the same time, we are tied to a global economy. A major aspect of my job is to clarify the links, to unveil the web that has poor and working class people caught in destitution and despair—and to help draw out the direction, strategies and actions that can remove us from these shackles.

It’s time to unite as many progressives, poor and working class people as possible, around the issues that matter. The Luis J. Rodriguez for Governor campaign is more than a campaign—it’s a movement. In our wake we plan to orient and train new leaders, to set up networks and schools for revolutionary change. We aim to not just organize, but to win.

To find out how to get involved, please go to www.rodriguezforgovernor.org. We need donations of money and time—we are a ground up, grassroots campaign that will not have big corporate donations. Despite the great odds, we are determined to build something new and vibrant in California.