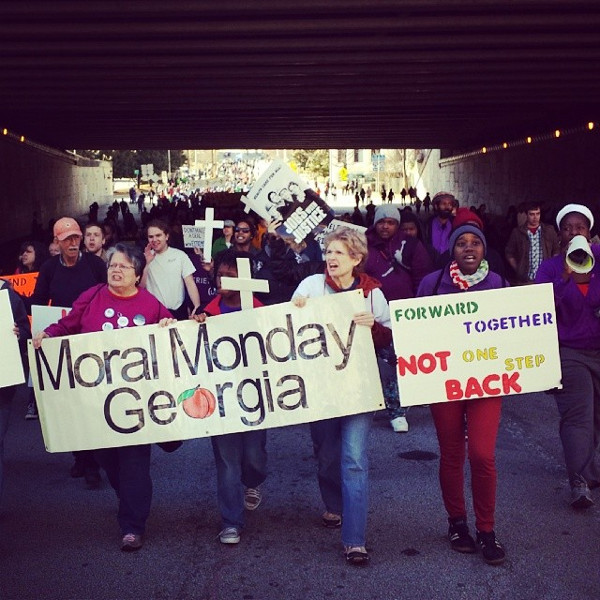 Since Georgia’s 2014 session began, an emerging coalition has managed to pull off mobilizations at the state’s capitol every week. So far, over 30 Moral Monday Georgia coalition members participated in very principled nonviolent civil disobedience.

We are young, we are old, we are black, we are white, we are gay, we are straight, we are men, and we are women. Many of us are very religious, some are not.  As a group, we are not aligned with one political party. We have many differences. We are people who would normally not mix, but there is something that has brought as all together for a cause we believe so deeply in that we have been willing to put our freedoms on the line.

We believe that Georgia has been high-jacked by an extreme radical agenda that our state simply can no longer afford. Year after year we see a budget and tax code that benefits a few at a cost to everyone else. We see the standard of living going down for the overwhelming majority for the benefit of those that already have so much. We see the majority of our state’s politicians acting in the interest of big business to the detriment of everyday Georgians.

So we have come together to build a Moral Movement in our state to remind our elected officials who they are accountable to. We believe our state budget is a Moral document, and that all Georgians should benefit from our state’s prosperity, not just the rich. We are in a crisis of economic priority, not one of economic resource; we know there is enough to go around.

Our challenge is to build together, work through all the historic mistrusts that have enabled a small group of the super rich to keep our communities divided. We have passed the point where we can afford to wait. This year’s legislative session has seen corporate sponsored attacks on women, workers, the LGBTQ community, voter’s rights, our schools, even churches.

They are trying to turn the clock back on fifty years of human progress. There’s a struggle ahead, and it may take years to build the kind of people power that transforms Georgia’s political landscape but it is the inevitable task of the time.

One thought on “Moral Monday fights on in Georgia”