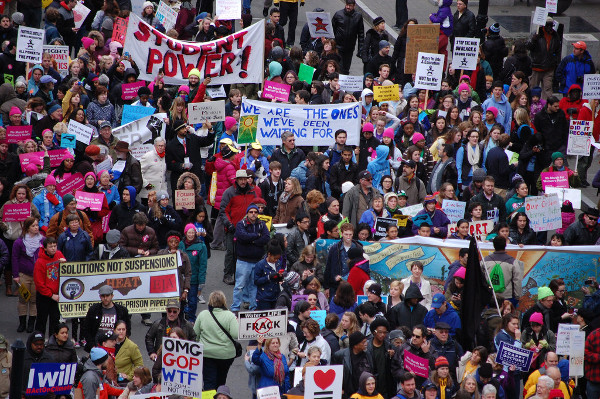 People’s Tribune: Melissa, where is the Moral Monday movement at today?
Melissa Hassard: The almost 1,000 arrests for civil disobedience from last summer are now going to trial.  Two retired judges were brought back to handle all of the Moral Monday cases, and they are returning mixed verdicts.  While most arrestees have had their charges dismissed, some have been found guilty.

Marches and events are being held throughout the state.  The NAACP participated in the protest at the governor’s mansion on coal ash. There was a Fayetteville Moral Monday and the next is in Iredell County.  When the legislature meets in May, there will be another in Raleigh. The NAACP has also been working on legal and political action responses to the Dan River Duke Energy mess, school vouchers, and voter suppression.

PT: How is the movement building unity to support its goals?

MH: It is deeply moving to see so many groups coming together to support each others’ interests.  Represented are citizens from every socio-economic status, every race and creed.  My favorite protest sign so far:  “There are so many issues I couldn’t pick just one.”  Rev. Barber talks about justice, love for each other, respect.  The crowd is absolutely in accord.

But so far the large numbers, marches, rallies, protests, calls, e-mails and noise have not swayed the Tea Party-led North Carolina General Assembly.  So now the work begins for a large voter turnout this year in elections.  The base is energized.

PT: Discuss the unity between the state government and the giant corporations.

MH: Governor Pat McCrory worked for Duke Energy for 28 years.  Since he took office, the state’s environmental agency has blocked lawsuits over Duke’s 32 coal ash ponds, before the coal ash spill that dumped 39,000 tons of coal ash into the Dan River.

PT: What are the people’s demands?

MH: That’s tough to say without some broad-sweeping idea like “justice.”  Over 500,000 North Carolinians lost their federal long-term unemployment. That means 500,000 people are no longer receiving federal assistance because of a decision at the state level.  North Carolina was the only state to discontinue longterm unemployment insurance.  Additionally, 250,000 cannot get Medicaid because the federal offer to expand Medicaid was rejected. Rev. Barber asked the Governor to reverse his decision and expand Medicaid.  It looks like that’s not going to happen, though.

There are a lot of issues going on within the state, from all that I’ve previously mentioned to new legislation affecting our teachers to the Duke Energy coal ash spill in the Dan River.  You could say the people are demanding a lot these days.

PT: What is the next step?

MH: Next is a massive initiative to register voters and make sure voters have their state-issued ID, which is now a requirement to vote because of the new anti-voter laws that passed last summer.  There will be a 50th Anniversary of “Freedom Summer” initiative which will be heavy on the voter registration front.  And the coal ash spill has become a tremendous issue — there will likely be an NAACP event in Eden at the Dan spill site.

3 thoughts on “Moral Monday movement for justice in North Carolina”