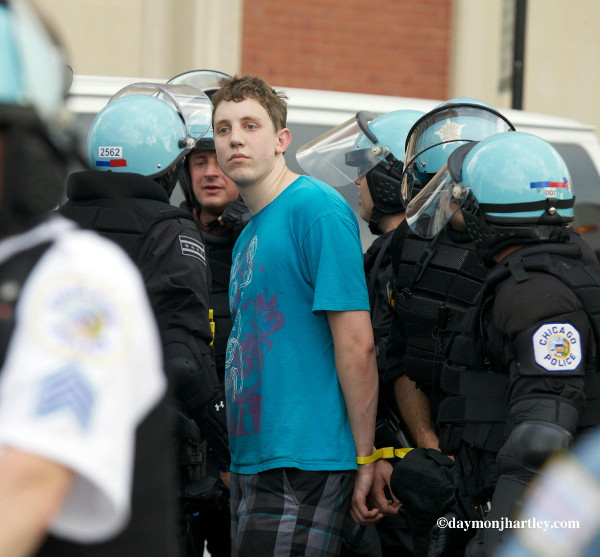 As technology continues to replace labor in production, the global market is shrinking, resulting in increased competition amongst capitalist countries for market share and control of resources such as oil and gas. This competition can also take a military form. The global economic crisis of capitalism has led to fascism. It is also leading to an increased sharpening of geopolitical tensions between nations and a drive toward war.

Fascism is the merger of the corporations and the government. This objective process is completed in the U.S. The economic, social, political and cultural features of fascism are also seen in a number of ways: the privatization of all spheres of the public domain; emergency managers replacing elected government officials; the omnipresent Surveillance State; the stepped up wave of police killings; legislation such as “Stand Your Ground” and the Federal anti-protest Trespass law, along with the National Defense Authorization Act that allows the government to arrest and detain a person without charges.

The ruling class is steady working to broaden the acceptance of fascism among the American people—which can only be accomplished by the step-by-step cultivation of a fascist culture. History shows that once society allows one section of the population to be isolated, discriminated against, persecuted and denied rights, the ruling class then moves on to do the same to another section and then another and so on. One latest step in this direction includes the February passage of the “Religious Freedom Restoration Act”—the Anti-Gay Law—by the Arizona State legislature, allowing business owners to refuse service to gay people and others on the basis of religious beliefs. The governor of Arizona vetoed the bill, but a fascist culture is still being organized on the issue and continues to grow. Other legislation like it has been stalled or failed in six other states, while such legislation remains alive in five others: Georgia, Idaho, Mississippi, Missouri and Oklahoma.

Culture is a way of life of a group of people—the behaviors, prejudices, values, symbols and beliefs they accept and that are passed along from one generation to the next without people thinking about it. To develop a fascist culture, the ruling class reaches into history and digs out the country’s most violent, horrific aspects. In America, that history includes the wholesale slaughter and genocide of Native Americans, chattel slavery and racism.

The danger today is that millions of American workers are being cut loose from their connections to the economy and social life of American society. They are impoverished, isolated and attacked, and they are desperate, angry and confused, looking for someone to blame. At the same time they are looking for meaningful answers. These workers are being targeted by a ruling class fascist propaganda offensive.

Culture is therefore a battlefield in which the ideas of class interests are fought out. We must take the weapon of culture away from the rulers, by cultivating a culture of class unity and caring for one another  that embraces a vision that is now made possible through the abundance created by electronic production — a vision of a cooperative society organized around distribution according to need, where everyone has a chance to contribute. Such a society will set the basis for unity and insure that the needs of all will be met forever.