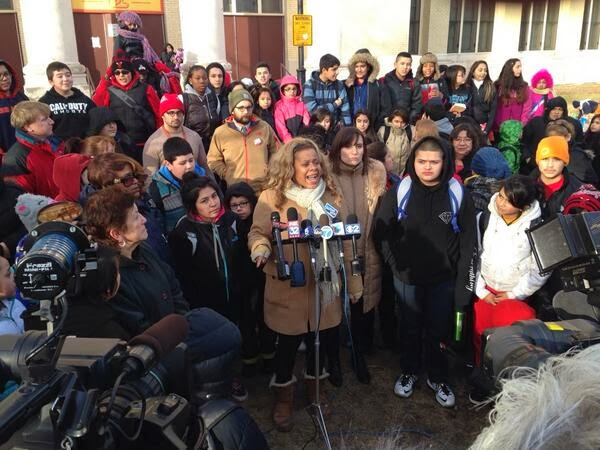 Opt out (of standardized tests) protest in Chicago.
PHOTO/GREGORY GOODMAN

CHICAGO — On February 25, teachers at Saucedo Academy unanimously decided not to administer the ISAT (Illinois Standards Achievement Test), scheduled for eight days in the first two weeks of March throughout Chicago Public Schools (CPS).  Drummond School teachers quickly followed suit.  More than 400 parents at Saucedo wrote “opt out” letters so their children did not have to take the tests. The movement spread across the city until more than 74 schools and more than 1000 students were involved.  CPS and the state Board of Education have threatened to fire teachers who do not give the test, even though CPS will not be using the tests after this year. The results this year will not be used for anything.

A wave of testing procedures has become part of public schooling. The Obama administration’s excuse is to prepare students to compete in the global marketplace.  But the testing regimes of No Child Left Behind, Race to the Top, and Common Core are not about improving education or a higher standards.  They separate the few to be highly trained, the rest of us are set up to fail, and the testing industrial complex feeds at a trough filled with publicly supplied dollars.

Around the district, teachers counseled parents on opting out and, in some cases, individuals boycotted giving the test. CPS lied about the consequences to students and threatened teachers. Some students were even punished for refusing to take the ISAT!  Catalyst reported that parent Rousemary Vega  “. . . told my daughter to lay her head down and say ‘I refuse to waste my time on this.’”

What are the combatants taking away from this heroic resistance?  Some parents and teachers have recognized that this problem extends beyond a single school. It cannot be ended on a school-by-school struggle. They are coming to see this as a national juggernaut aimed at children in public schools around the country.  They have been aroused by how this testing regime has hurt their children’s education.

CPS will use other tests next year for grading, selective enrollment admissions, and teacher evaluation. This will raise the stakes for resistance.  Hope for their future— parents, teachers, students—is being jerked away by forces beyond their control. On March 4, Vega responded to Mayor Emanuel’s “Don’t worry about it” by urging Emanuel to “stop over testing” and “start worrying about all kids.” (The mayor’s children are enrolled in a private school, which does not depend on high stakes testing.)

Government, merged with publishing, testing and other corporations, illustrates the national, class nature of the war on our children.  This demands a national, class response., beginning with the objective unity of parents, teachers and students across the school district and across the country. From scattered, defensive struggles, a national political effort can fight to end useless testing, for quality education for all.