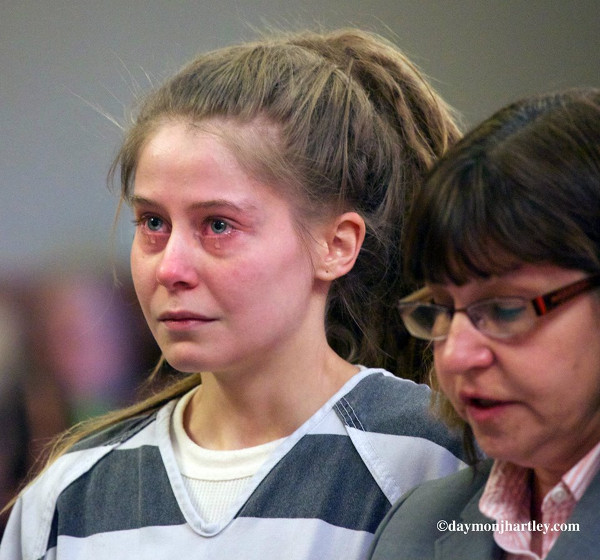 Barbara Carter, one of three women jailed after locking themselves to heavy machinery to protest the expansion of the Enbridge tar sands pipeline. The same pipeline ruptured in 2010, gushing nearly one million gallons of tar sands crude into the Kalamazoo River, making it the largest inland oil spill in American history.
PHOTO/DAYMONJHARTLEY.COM

The People’s Tribune interviews Vicci Hamlin, one of three women convicted of felony charges in their protest to stop the expansion of tar sands pipelines—before the next oil disaster.

People’s Tribune: Vicci, tell us how you became involved.

Vicci Hamlin: My husband and I decided we wanted to put our concerns and convictions about environmental justice into action. We were involved in many protests and actions and wanted to do more. We heard about “fearless summer” and sent an email to 350.org. They informed us of an action camp in Stockbridge, Michigan with a group called the MI CATS. Even though it was a three and a half hour drive, and we knew none of the other activists, we were excited and feeling like this would be “special,” and it was. We fought in the past against many forms of injustice, but climate justice was close to our hearts. It was an incredible weekend, and the decision was made by my husband and I to do a direct action against the Enbridge corporation and the 6b expansion pipeline. We knew there was a chance of arrest and that one of us would need to be out of jail, the support person for the other. I chose to be the one that locked down with three others. We all believed deeply that if these dirty tar sands weren’t stopped, it would be as James Hanson had said, “game over” for future generations and our beautiful planet.

PT: What danger does tar sands extraction pose to our children and humanity?
VH: Grave danger. it emits more greenhouse gases than any other form of production. If not stopped, I fear that my grandchildren and all God’s children will suffer and if not die, wish they could!
PT: What was your charge and sentence?

VH:  We were charged with a felony charge of assault/resist/obstruct and a misdemeanor charge of trespassing. Three of us decided to take it to trial and were found guilty by a jury on both counts.  Our bond was revoked and we were immediately taken to jail where we spent 34 days. At our sentencing, we were given time served—13 months probation and over $42,000 in restitution to Enbridge, plus $746.00 in fines for each of us.
PT: Why did the government come down so hard on you?

VH: I believe they wanted to make examples of us. As I told the judge on the day of our sentencing,”You may believe if the penalties are severe enough resistance will falter and eventually die, but you are wrong!”  Also the policeforce were paid by Enbridge to protect their pipelines and who knows who else?

PT: What kind of support did you get?

PT: What is your vision of a new society that cares for the earth and it’s people?

VH: One that values love over fear—people over profit.

20 thoughts on “Tar Sands activists vow to continue the fight”