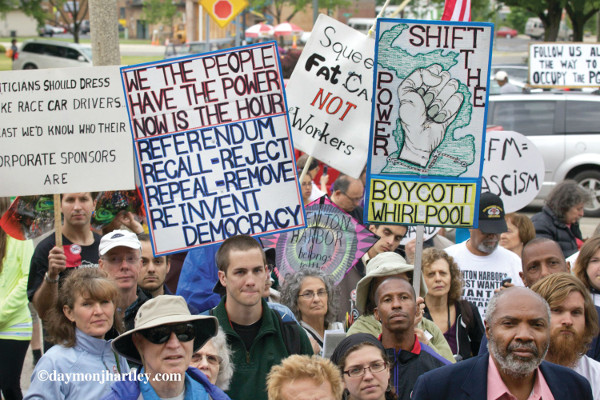 One of many protests in Benton Harbor for democracy and against the corporate takeover of the city.
PHOTO/DAYMONJHARTLEY.COM

A Benton Harbor resident, James Cornelius, said, “I finally felt the sting of voter harassment in Benton Harbor. The people, who signed the recall petition for former Mayor James Hightower, were extremely upset about the Sheriff’s harassment, but said this will not prevent them from signing another recall petition and going to the polls to vote. “
In the last six weeks, they [sheriffs] have knocked on doors in Benton Harbor, under the guise of an “investigation. Similar harassment practices were used in the city’s 2011 mayoral election.  Emergency Manager Joseph Harris deployed police officers to voter precincts to intimidate residents.

In the current election, the Benton Harbor City Clerk verified 440 recall signatures as valid. The Berrien County Clerk verified 402 recall signatures as valid. The required amount to recall James Hightower is 392. In spite of these results, the Berrien County Prosecutor is conducting a false investigation. This voter harassment by the Sheriff and Mayor is intended to have a harmful impact on eligible voters who are trying to exercise their constitutional rights.

Unfortunately, the media has turned a blind eye. New Buffalo, a white neighboring town, is having a recall election on May 6. The Mayor of New Buffalo, along with a Council member, was recalled. However, the Berrien County Sheriff and his deputies are not roaming the streets of New Buffalo intimidating voters. They have not knocked on one door in New Buffalo.

There is a clear double standard. There have been numerous Herald Palladium stories on the Benton Harbor recall, but none on the New Buffalo recall. This is an issue of race. It is also a result of a Whirlpool land grab by any means necessary.  The Benton Harbor recall is directed against Whirlpool’s control over the city. The New Buffalo recall is not anti-corporate.

All citizens have the right to recall or initiate a referendum by way of petition. To intimidate, harass, accuse, or use Gestapo tactics to infringe on a citizen’s civil rights is a federal crime.

At the root of all of this is the growing poverty of the people of Benton Harbor while corporations profit. “An economic system that doesn’t feed, clothe, and house its people must be overturned and replaced with a system that meets the needs of the people. “ (People’s Tribune)