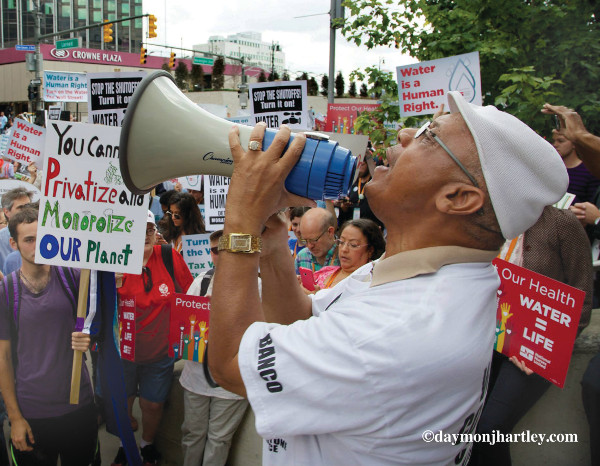 Rev. Edward Pinkney speaks at protest against water shutoffs in Detroit. The two cities are both fighting the corporate stranglehold of their city and the privatizing of public resources.
PHOTO DAYMONJHARTLEY.COM

BENTON HARBOR, MI — Gentrification has tremendously changed the city of Benton Harbor. Many in this former industrial town—that at one time had plenty of jobs— are now living in dire poverty. Over the years, we’ve witnessed a systematic remaking of the city around the class interests of the corporations. This effort has been led by the blood-sucking global corporation, Whirlpool.

Gentrification for the rich has created an entirely new environment for corporate profit making. In place of industry, Benton Harbor has become a Disneyland of Harbor Shores with the Jack Nicklaus Signature Golf Course surrounded by expensive condominiums, hotels, playhouses and whatever toys the rich need. It has been a complete assault on the poor. It’s the rich against the poor and the haves against the have-nots.

This could not have happened without the help of Benton Harbor’s corporate puppets. Puppets are greedy people who sacrifice the interests of the masses of people to advance themselves. Puppets justify their actions by manipulating the social machinery, which controls the opinion of the people. To advertise on a scale that could reach tens of thousands of people is expensive. To reach and persuade group leaders who can dictate the public’s thoughts and actions is a wise expense. The Whirlpool Corporation believes every person, Blacks included, can be bought and sold for a price. And, some can.

Benton Harbor’s corporate puppets include leaders and pastors who are all poverty pimps. This includes Mayor James Hightower, Commissioner Sharon Henderson, Commissioner Ruthie Haralson, and Commissioner Duane Seats. The corporate puppets that control the church, those who demand 10% of everything you get, are identified with Scribes and the Pharisee, who were the historic enemies of Christ. Puppet pastors receive money from the government and corporations to help them control the community. Puppet pastors who are not in the community supporting the community and city should not receive our tithes. When a church ceases to have a heart and ministry for its community and city, it could perish.

We need to get involved in the struggle for the survival of our community. One step is to join the international boycott of all Whirlpool products: Amana, Estate, Gladiator Garageworks, Insperience, Jean- Air, Kitchen Aid, Magic Chef, Roper, Acros, Inglis, Bauknecht, Admiral,  IKEA by Whirlpool Appliances, and Kenmore.

The people have to take a stand and say enough is enough!