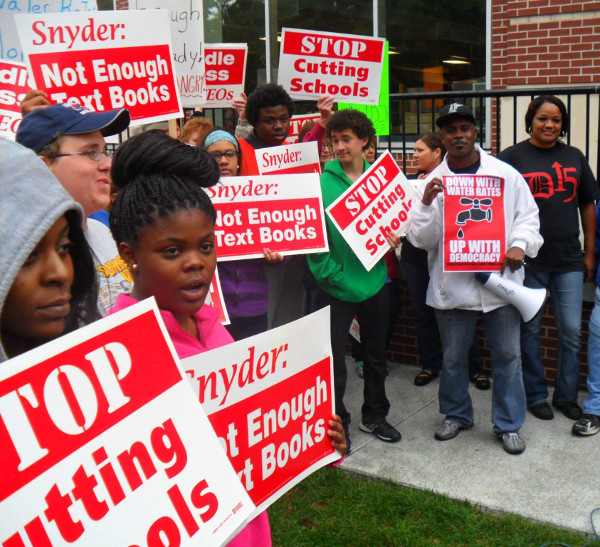 FLINT, MI — Under Michigan’s Emergency Manager law, the city of Flint is run from Lansing, the state capital. Flint’s city council, mayor, and charter have no power. Residents have no voice. All local decisions are made by Gov. Snyder and carried out by an Emergency Manager he appoints.

The United Nations has declared “safe, clean, accessible, and affordable drinking water and sanitation” to be a human right. Water shutoffs and unsafe water deny this right and put entire communities at risk of disease and other health complications.

The recent multiple fecal contaminations of Flint’s water supply (triggering boil water alerts) are the direct result of the decision to abandon the Detroit water supply for a new Lake Huron pipeline. Independent auditors commissioned by the State called this a “major risk” and said Flint and Genesee County residents would be better off staying with the Detroit regional authority, but Governor Snyder’s Emergency Manager pushed the plan through anyway.

Now everyone is paying high water rates because those fees are the security for bondholders in the new pipeline deal underwritten by J.P. Morgan Chase and UBS. That’s the “comeback kid” in action!

Our Public Health at the Expense of Our Public Wealth