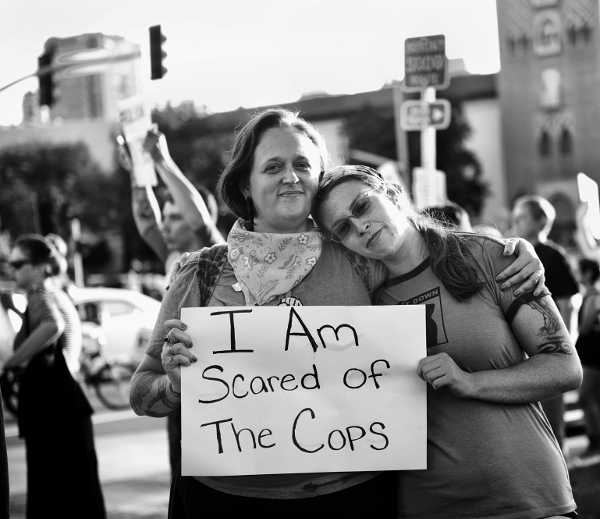 KANSAS CITY, MO — In an August issue of Time, Kareem Abdul-Jabbar responded to the racial politics surrounding the killing of Michael Brown calling for “more protests across the country,” saying “the middle class has to join the poor and whites have to join African-Americans in mass demonstrations.”  That same month just on the other side of the state from Ferguson, Missouri, a documentary and two acts of violence against white teenagers made it clear why such organizing needs a clear understanding of the relationship between racial and class politics.

The day before Michael Brown was killed, the documentary Rich Hill debuted in Kansas City, Missouri. The movie is important because it takes a close look at lives ignored, vilified or mocked by most mass media. It tells the story of a year in the life of three young white men growing up in the rural poverty of a dying farm town about an hour south of the city. The result is an American tragedy of youth offered no future, at least one of the boys in the film without needed mental health support.

Two weeks later, Joseph Jennings, an 18-year-old boy much like those in Rich Hill (but on the other side of the state line) was killed by police within three hours of his release from psychiatric care in Ottawa, Kansas. Police said he moved as if he had a weapon, but no one has claimed he was killed with a weapon in hand. During the confrontation, his uncle offered to tackle the boy, but police threatened to shoot the uncle if he tried. Though his aunt ran to the scene yelling that the boy wouldn’t harm anyone, police reportedly shot Jennings 16 times. Now, the case is being reviewed by the Kansas Bureau of Investigation.

Two weeks later, Bryce Masters, the 17-year old son of a Kansas City, Missouri police officer suffered cardiac arrest after a traffic stop by an Independence, Missouri police officer. The Independence police said that the teen refused to roll down his window, so he was tased and pulled from the car. Masters’ heart stopped, and he now suffers brain damage. His family awaits the results of an F.B.I. investigation.

Both families want to make the system work. Many poor white Americans are still taught to believe it should, though the system only serves economic power they do not have. Many ethnic minorities have long understood the system works against them, and that’s an understanding that needs to be shared across racial lines.

Stories about white victims of police brutality get little attention because American racism was made to divide the poor while serving the rich. But the hard lives and cruel deaths of whites suffering under the system reveal the lies behind this division. In truth, we all need each other to understand our story, and only together will we build the future our youth deserve.