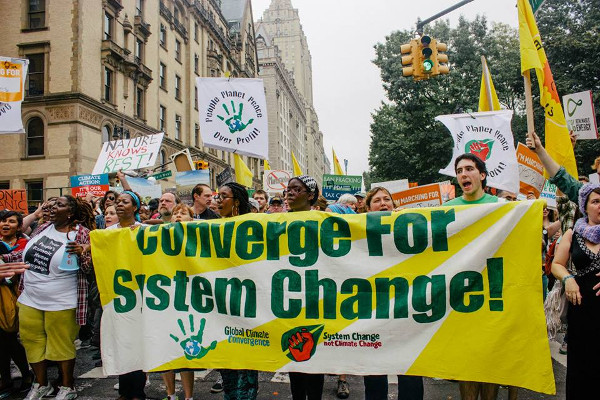 NEW YORK CITY —The world’s capitals will not end the old economy or deliver the new one.  We can’t wait any longer because every day of waiting reduces our window for action. We need not wait because we already hold the knowledge needed for creating the new economy.

You may think that Wall Street or Washington D.C. will change course and lead our economy in a new, climate-neutral direction. If so, read no further.

But if you are unwilling to entrust your future to the money men and the political class, then consider this: Regardless of who you are, the person who holds the most power in the world to end the climate crisis may be you.
One way to guarantee an end to the climate crisis is to stop doing the things that are heating the planet. Stop fossil fuel production and use. Stop greenhouse gas emissions. Stop rainforest devastation. And since the corporate and political capitals of the world are unwilling to stop themselves, we must stop them ourselves.

We can stop them by refusing our participation and cooperation. We can stop them by withholding our labor. By folding our arms we can halt the machine responsible for the climate crisis and in one fell swoop create the space for the new, green economy to take root. We should go on strike.

A global climate strike is a next step in the international uprising that insists that another world is possible.  That uprising has taken to the streets in the tens of millions. It has even occupied capitol buildings and the halls of capital. Yet the street demonstrations have yet to work because most global elites are not listening and will not listen. And while the occupations and blockades have succeeded here and there, the bulldozers of profit keep moving everywhere else. It is time to shock the system with a global climate strike.

A global climate strike stops the economic and political systems responsible for the climate crisis. Workers and students stop their usual work. Machines and money stop moving. And in anticipation, communities step forward into the breach to build the new economy that puts people and planet over profit.

A global climate strike might last a few days, or weeks, or at some point, it might move forward without end. It will be a global strike because the climate crisis is not a national problem, it is a systems problem. The system of global capitalism dominates much of the world and it will take a worldwide movement to stop this system. The strike may begin in 10 or 20 countries, and in particular economic sectors, but from there, it must spread.