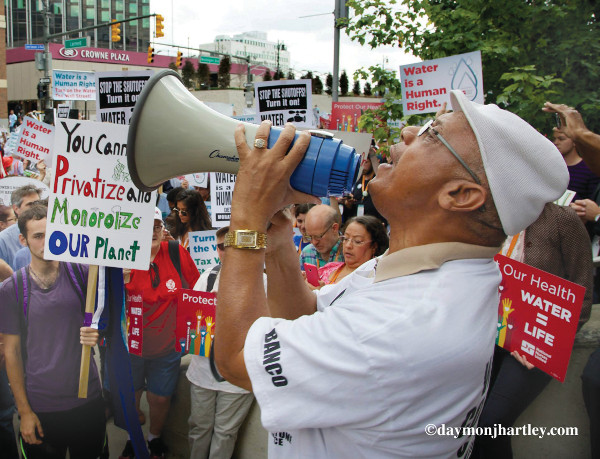 Rev. Edward Pinkney speaking at a Detroit protest about the cut off of water to thousands of families.
Photo/daymonjhartley.com

The People’s Tribune interviewed Rev. Edward Pinkney who is imprisoned in Marquette, Michigan.  Pinkney is a leader of the people who was unjustly convicted of vote fraud charges in Benton Harbor, MI and sentenced to up to ten years in prison. He speaks about what this fight is all about.

“My case represents a direct attack on democracy. This is an issue around the world, and especially here in the U.S. It shows what the corporate power structure will do. They are determined to crush anyone who stands in their way. They need to control the working class. It’s about the haves against the have nots, the rich against the poor. It’s not about Rev. Pinkney or Benton Harbor. It’s an issue for everyone. They no longer need workers like they used to. It doesn’t matter if you are Black, white, Mexican, Puerto Rican, etc. If you’re not part of what they’re trying to do, you’re not useful to them.
“This struggle is really because of the economy. We must find a solution. We can no longer allow a society that cannot feed, clothe and house people. That society must be overturned. We need to make sure everybody is fed, clothed, and housed in America. They are cutting food stamps.  They are cutting subsidies for housing. Until the people take a stand, they are going to continue doing the same thing. What’s next after food stamps?

“We have to show them we are not willing to lay down and let them walk all over us. This is why I don’t mind being in the prison system. I don’t mind even this horrible food. I don’t mind that I came up here in a cold bus, shackled; it took two days. I don’t mind because I know we are going to win in the end.  I know this because the poorest workers stood up in my trial. They told the truth and were not intimidated by the sheriff and prosecutor. It was so profound. It gives me hope. All this is not for nothing. All this is just the beginning of something bigger than Rev. Pinkney.

“We’re talking about a movement. We’re getting world recognition. We’re doing all the right things. We must make this struggle a victory for all who are victims of this economic crisis in every city, state and country. We must continue to fight this battle until we win, and we will win. That is why we are fighting today.”

One thought on ““This is a fight for us all,” says Rev. Pinkney”