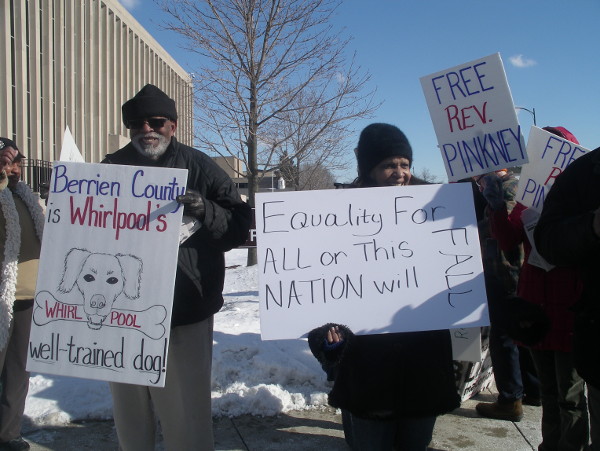 Protest outside the Berrien County Courthouse following a hearing on a motion to release Rev. Pinkney pending bail, which the Judge denied.
Photo/Sandy Reid, People’s Tribune

The ruling class has always gone after the leaders of the movement. But we must remember that when they first tried to arrest Rev. Edward Pinkney they surrounded the block where he lives, blocked off his street to traffic and sent in a SWAT team. Why did they need that kind of force? Did they intend to kill him? Luckily they just missed him. He had taken his wife out for her birthday.

The fact is no one charged with something as small as petition fraud gets that kind of response. Rev. Pinkney’s constant challenging of Whirlpool’s corporate rule in his town, and his pointing out the class nature of that rule, makes him the kind of threat they want to silence forever.

His message that it’s not just simply “Black against white, but the haves against the have nots,” and that we “as an oppressed class must take a stand,” is gaining support around the country. People are getting it— if it can happen in Benton Harbor it can happen in any town, even yours.

To the ruling class, successfully challenging corporate rule is a crime. Rev. Pinkney’s entire case must be seen in this light.