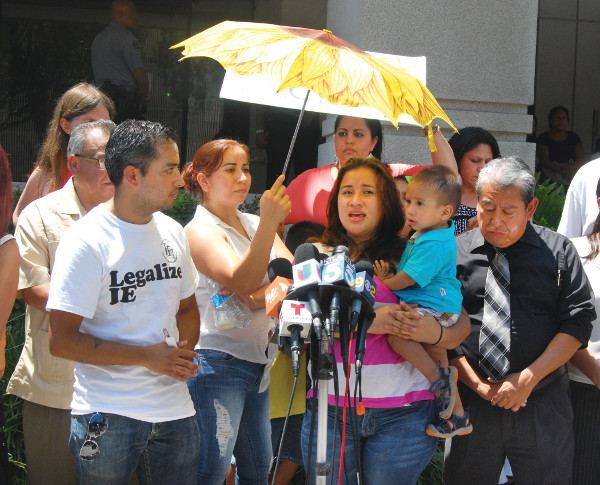 Mother, aged 22, and her child, speak to the press after being transported from the Texas border by immigration authorities to California. A massive police force is installed at the border to arrest immigrants who flee U.S. inspired violence and poverty in their country. Upon arrival, they, rather than the corporations, are blamed for America’s poverty.
PHOTO/CHUCK PARKER

WESLACO, TX — National guardsmen, State Police, Border Patrol, FBI and local law enforcement special taskforces are patrolling a 100-mile strip of land terrorizing the populace! Is this Ferguson, Missouri? No! It’s the Rio Grande Valley of south Texas, the poorest area in the United States where the U.S. government, with the excuse to “secure the borders,” has seen a massive influx of police. It has converted this area into a land under siege and fear.

From San Antonio to Corpus Christi, to Laredo, McAllen and Brownsville, Texas, this land known in historical times as the “Nueces Trace,” was the reason in the 1840’s that the U.S. launched its war of aggression against Mexico. This area has seen its share of violence and migrations from Mexico during the 1910 Mexican Revolution, the first and second world wars. Now, with globalization, a massive surge of immigrant refugees from central America are coming to the U.S.

You may ask, why so much police and military hardware? Are we expecting a war or a foreign invasion? Are these measures designed to protect the public from a foreign enemy? Think again! The U.S. government was not expecting the American people of South Texas to come to the defense of the immigrant children who are coming here to escape the decades of U.S.-sponsored war, overthrow of democratically elected governments, and the U.S.-backed drug trade and the consequent destabilization, poverty, and crime in their home countries. The U.S. government was expecting all southern border states to reject these poor refugees, deport them instantly, instead of providing assistance and protection. In the face of this, the weapons that are massed at the border can and will be used against workers that stand up and demand a humanitarian response to the border “crises,” instead of more militarization.

Efforts are under way in some border towns to restrict the rights of workers to freely assemble, protest and bring redresses against the US government by initiating ordinances against loud music or “loitering” on public streets. In response, the workers from the Rio Grande Valley are organizing caravans to Austin, Texas, in February to bring attention to the present crises and devise real solutions instead of more guns and prisons.

This government doesn’t care about our brother, sister or children refuges or the unemployed and underemployed America worker, who are being forced into low wage jobs (or none at all) and into dire poverty. The American capitalist class requires a dramatic increase in violence to police this new section of workers. They are afraid, most of all, that we will no longer see ourselves as White, Black Chicano, Mexican, Central or South American, etc., but as American workers destined to overthrow our chains and establish a new society based on cooperation and equality.

What is happening in Los Angeles, Ferguson, New York and the Rio Grande Valley is no accident, but a coordinated effort to push the American workers back to the days of slavery.