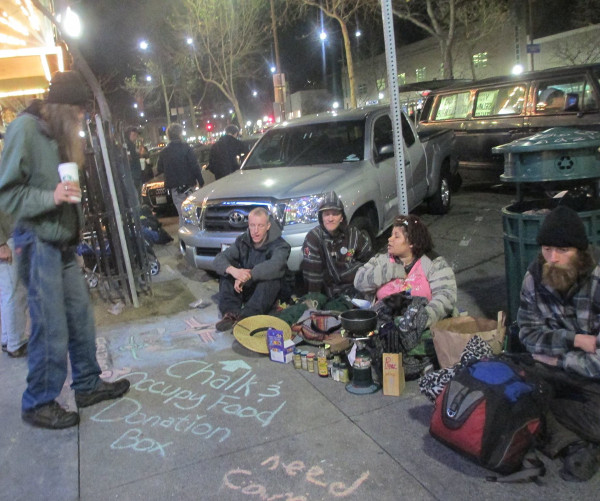 Mike Zint of ‘First They Came for the Homeless’ talks to some Berkeley, CA street kids after their chalking action defending their right to sleep in 2015.
PHOTO/SARAH MENEFEE

BERKELEY, CA —The defense of the commons is entering its eighth month. Our commons are under attack. On June 1, 2014, we started occupying Staples in San Francisco. The purpose was to bring awareness about the privatization of our Post Office, the installation of postal kiosks in Staples where low-wage employees are doing the jobs of union postal workers, and the systematic destruction of critical Post Office infrastructure. The post office is not broken, they are breaking it and selling it off for profit.

The occupation has changed targets several times. Last June we went from San Francisco’s only Staples store to outside Senator Dianne Feinstein’s office. Her billionaire financier husband Richard Blum stands to profit from the privatization of the post office, and is also involved with Bain Capital, which is invested in Staples.

Because of the police abuse of the homeless in San Francisco, we moved to Berkeley and occupied Staples here. At the end of October we found out that the historic downtown Berkeley Post Office was under contract to be sold to a local developer.On November 1, we moved the occupation to the post office. The occupation and its tent structure has withstood over a dozen raids by the postal police, heavy rains, and gale force winds. We have installed a community garden, a free store, a book exchange, and a community info table.

While occupying, a new fight developed. Gentrification and privatization of policing through the use of ‘Community Ambassadors’, who represent the Business Improvement District [BID], has been leading to harassment of homeless people in downtown Berkeley. The Berkeley BID reportedly wrote a letter to the businesses on Shattuck Ave. that they should stop giving water to the homeless. The Papa John’s Pizza franchise took it one step further and refused to serve the homeless entirely. The manager and/or owner believed that a sign saying “we reserve the right to reserve service” applies to a whole class of people.

An immediate, direct response was called for. Using chalk to message, the homeless fought back. Under threat of arrest, they promoted a boycott and did good outreach, messaging their rights in front of Papa John’s. Since chalking on a public sidewalk is not illegal, and because of our cameras, the police stopped trying to intimidate us. Over three days we chalked and raised hell, until the manager was forced to extend an olive branch. He negotiated a truce: he would serve the homeless again and the homeless would stop the chalking and the boycott.

This immediate action against gentrification took three days, a dozen people, and a few pieces of chalk. A small group with limited resources took a stand. They were directly affected by the decision that they would not be served. And they did something about it.

A small group of determined people really can make a difference. Injustice and discrimination cannot be tolerated by our society. And we must say no more.