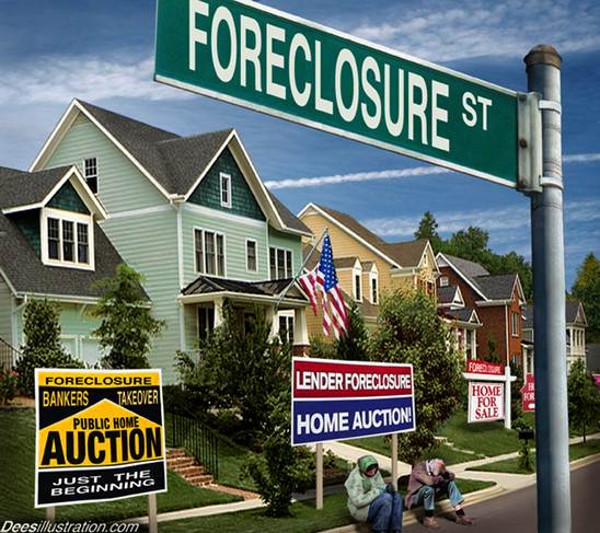 Millions have lost their homes to foreclosure and millions more are going to lose their homes as real estate conglomerates buy up properties and raise rents. (This is a photo illustration; not an actual photo.)
PHOTO/FREEGOOGLEIMAGES

SANTA ROSA, CA — “I am being drove out of the county,” Marie Leal told the Santa Rosa Press Democrat as she struggled with being turned out of her apartment by a landlord who wants to rent it to higher-paying tenants.

Once on the street in Santa Rosa, she would face rapidly rising rents and the tightest housing market in decades. She might indeed have to move an hour or more away out of Sonoma County.

The management agent is a faceless partnership named FF Properties. But the company hiding behind that name is Brookfield Asset Management, an international conglomerate that oversees $200 billion in real estate. Over the last decade, Brookfield has delivered to its wealthy investors an average profit of almost 20 percent per year—including the rent paid by Leal and her neighbors.

Leal and the 30 other low-income families told to get out of their apartments were among Brookfield’s newest targets. But as real estate is increasingly concentrated in the hands of the capitalist oligarchy, there will be many more.

Since 2007, 7.5 million families in the United States have lost their homes to foreclosure and short sales—forced out largely by the five biggest U.S. banks. Now economists predict that millions more people will be kicked out of rented homes and apartments. Real-estate conglomerates like Brookfield are raising rents and buying up even more properties to renovate and rent out at higher rates.

Nationwide, rents rose more than seven percent last year alone. But wages have not kept pace, and a quarter of renters say they are at the end of their rope financially. Half of them say they couldn’t come up with extra money to cover an emergency. Estimates of how much of their income is getting eaten up by rent run from 30 to 40 percent, with many paying 50 percent or more.

The situation is worst in California, which contains seven of the 10 metropolitan areas where real-estate moguls take the biggest bite of renters’ incomes.

Rents are also going up faster in the Bay Area than elsewhere. In Santa Rosa, landlords pushed rents up more rapidly than almost anywhere else in the U.S.—more than 30 percent over the past three years, 12 percent last year alone. Rents in San Francisco, the East Bay, and the Peninsula were up by nearly as much.

When a reporter for the Press Democrat contacted Brookfield about Marie Leal’s pending expulsion, the company did an about-face and said that she and the other low-income tenants could stay on. “Boy, that’s huge,” she told the reporter. “At least we know we’re not going to be out on the street.”
That lasts as long as it lasts. And the other millions facing potential eviction are not likely to be so lucky. With robotic technology undermining jobs and wages— and cash-hungry capitalists driving up rents—only the political unity of We, the People, will guarantee that we have a roof over our heads.