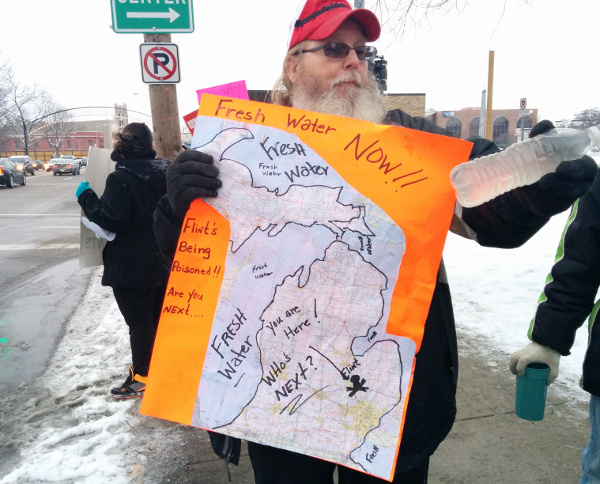 FLINT, MI — Giving new meaning to “Justice Delayed, Justice Denied,” Flint’s Emergency Manager recently announced the formation of a water ‘advisory committee’ to bring “solutions” to the water crisis gripping the city of Flint. Veolia North America, the notorious private water corporation hired as a consultant by the Emergency Manager made the recommendation. Despite the recent DEQ report citing the Flint water as out of compliance with elevated levels of cancer causing trihalomethanes (TTHMs), in violation of the Safe Water Act, we continue to be bombarded with “the water is safe to drink”!

A recent demonstration in downtown Flint was joined by Bob Bowcock, founder of Integrated Resource Management, and a longtime investigator with renown environmentalist, Erin Brockavich. For weeks, various community groups such as the local Concerned Pastors for Social Action, the Democracy Defense League, the Facebook group—Flint Water Class Action, have called on the Emergency Manager as well as the Governor to return to the Detroit water system and to end Flint River as our water source. If it was good enough for General Motors (ending the Flint River source), who cried foul over rusting engine parts, it’s good enough for us.

Politicians’ water giveaways and free water test kits and the like has only strengthened our resolve.  Even the local TV news station did a special and concluded that the water was “safe to drink.” All these efforts have been an attempt to convince us to live with a  health challenged water system that we cannot use or afford.

A Line In The Sand

Skin rashes, foul odors, hair falling out, and rust colored water are epidemics spreading throughout the city. Meanwhile, the Emergency Manager regime continues to turn off the water of residents who pay the highest rates in the state—with few, if any, arrangements to be made. With political power resting in the hands of an Emergency Manager, the hiring of Veolia gives us great pause. In Pontiac, the Emergency Manager handed over the water system to United Water Services, Inc. Will we, the people, control our water in the interest of humanity or will naked corporate interests win this fight?

In the final analysis, protestor Gladyes Williamson summed up the heart of the situation: “I can’t believe it. Here I am in Flint, Michigan. I never would have thought I’d be drinking contaminated water surrounded by the Great Lakes!”

3 thoughts on “No Safe Affordable Water—No Peace in Flint, MI”