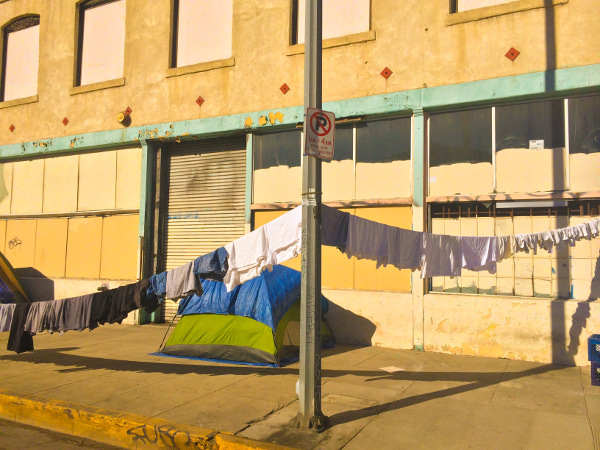 Tent on Skid Row, downtown Los Angeles. More than a thousand people in Los Angeles sleep on the streets in cardboard boxes and tents while billionaires in the city sleep in multi-million dollar mansions.
PHOTO/LYNN ROSSI

LOS ANGELES — International, educated, articulate and proud, yet she is also living in a mission in Skid Row—downtown Los Angeles. This proud euro-Black queen defined herself as a community ambassador, and advocate for women’s needs through Downtown Women’s Action Coalition (DWAC).

Today, this proud euro-Black woman has an aristocratic demeanor about herself.  She tells me, “I began healing and discovered my authentic self, I truly feel whole now.” But she reveals that “she dealt with early childhood abuse, at the age of four she was told to say to herself . . . You are ugly.”

At the age of 16 she was put into the system, in Europe.  Someone who suffers from PTSD, due to her early life trauma, she says . . . ”I just wanted to go far away because I did not want to be reminded of anyone from my past.” Consequently, she ended up in the United States.  Once here, opportunities were coming about, however, because of her PTSD, she was afraid to take any legitimate opportunities; “I was more familiar with abusive situations, abusers and unsafe people,” she confesses, “that’s what I knew”. Therefore, she lost everything, ended up on Skid Row; “I was told resources/agencies are available here; that I could get food, help and shelter.”

According to a DWAC Assessment, in the 2013 demographic, fifty percent of the female population in Skid Row is African American. The Hispanic/Latino population is just over 14 percent, non-Hispanic white just under 12 percent. “Racial demographics show that African-American women have been consistently over-represented in the homeless population. African-American women also make-up the majority of women sleeping most frequently in shelters (60.7%) and in the streets (40.6%).

According to my source, case management administrators report how challenging it is to place women who are sleeping in the tents with their spouses/significant others; some homeless men humorlessly refer to them as their “tent wives”, a possession. However, when these women endure domestic violence, their situation is looked at differently, simply because they dwell in a tent. My source informed me that domestic violence shelters have a challenging time placing homeless women of abuse. She said the law does not always consider them domestic violence victims, due to sleeping in tents, as opposed to a physical residence/private property.  Instead, the assault is considered a simple battery.  Thus, often placing the victim back into the general population (i.e.: “the streets”) rather than a domestic violence safe house environment.

Why are there so many homeless Black women? No one should be homeless. End the homelessness of every man, woman and child. There appears to be an “elephant in the room” that the system is over-looking when you take the above information into account.