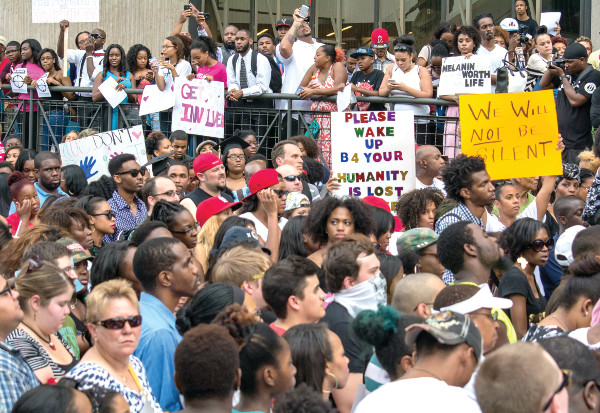 ATLANTA, GA — The police killings of Michael Brown in Ferguson and Eric Garner in New York cast a spotlight on a systemic problem of police violence, a situation well known by the citizens of Georgia. Atlanta Progressive News reported that Georgia police have killed at least 168 people in the last ten years. The actual number is much higher; many cases of police homicides are not even reported.

In Atlanta alone there have been 208 allegations of excessive use of force by Atlanta police officers since 2011. As the Davis Bozeman law firm reports, “there are just so many incidents of people getting slammed on their face, getting their teeth knocked out.” Attorney Mawuli (Mel) Davis says, “So it doesn’t always manifest in a death. Sometimes it is a cussing out, an elbow, a pistol whip. The worst case is death.”

What this all indicates is that police violence is routine, and since almost none of the police perpetrators are found guilty, then more and more are coming to see that the whole system is guilty, and something must be done about it. Business as usual can no longer be allowed.
New groups of youth such as Generation Y, It’s Bigger Than You and ShutDownATL have taken to the streets to show their resistance to a growing police violence. They shut down interstate highways, conducted die-ins at major shopping malls and even disrupted the Martin Luther King march in order to say that there can be no business as usual, even for the movement.

These new groupings have also joined forces with Moral Monday in Georgia to demand that laws be changed in order to bring the police under control. A Law Enforcement Reform Package has been introduced into the state legislature that includes ending no-knock warrants, de-militarizing the police, repealing the Stand Your Ground law, ending racial profiling and putting body cameras on all of the police. There are also calls for citizen review boards that have real power.

There is a growing awareness that a government that is supposed to care for and secure the people has no intention of doing so. Their answer is that no help is coming, and if you resist your impoverishment, if you demand your rights, if you do what you have to do to survive, the state will move to contain you, to control you by force in order to impose its will.

There is also a growing movement that cannot accept this. The impoverished conditions in which these communities are forced to fight for survival is the basis for which a systemic police violence has arisen to contain the growing resistance.  The only solution is a society in which the material needs, health care, education and everything that it takes to have a full and happy life are provided for everyone. The people will not be contained or controlled. The people will fight to secure their future.