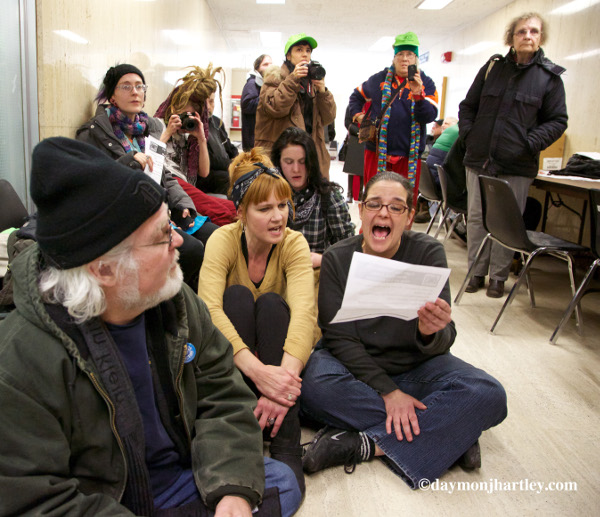 People facing tax foreclosures protested at the tax assessors office in Detroit, Michigan. They submitted demands and held a brief sit in.
PHOTO/DAYMONJHARTLEY.COM

DETROIT, MI — The war on the poor is in full swing in Detroit. Before the auto show, Mayor Duggan expressed his determination to eject a dozen citizens from a tent city down the street from the event.

In January, ‘show cause hearings’ at the same location have brought an estimated 15,000 citizens desperate to save their homes from tax foreclosure. So-called ‘options’ such as ‘Step Forward’, and agencies offering ‘counseling’, as well as new laws lauded to ‘help’ those in housing jeopardy, are largely failing.

One by one, as angry Detroiters left, it was easy to see that little help was available, and no help at all for those needing it most, like a construction worker with congestive heart failure, waiting for disability. Those of us there to help the poorest were banned from the show cause floor, and then the building, for daring to offer alternative options to those with no ability to pay.

The Wayne County Treasurer, David Szymanski, rushed downstairs in a rage to tear up a sign we posted, and we were forcibly escorted out by security and police, despite the fact that our First Amendment rights were supposed to be insured there. Still, we were able to get hundreds of objection forms signed, and invited citizens to join us at the City County Building for an action at the Tax Assessors Office, and also at our Mayor’s ‘State of the City’ address.

There is still much to be done, as we attempt to mobilize thousands of people in certain danger of living in the streets. If the Mayor is concerned about a dozen people living in tents, what plan does he have for 50-100,000?

This winter there have been dozens of cases of amputations at local hospitals due to frostbite, and last spring a homeless man was found frozen to death, having slept in a Port-a-Potty on Lake St. Claire, after losing his home to foreclosure.

The good news is, people all over the country are taking steps to house the homeless. In Madison, WI, tiny homes have been built. In Tucson, Arizona, a man named Jon McLane has been fighting in court and winning the right for over 40 homeless citizens to sleep in ‘Dream Pods’ on sidewalks of a park.

Slow progress is being made in a myriad of ways, mostly by those from the Occupy movement, but people are displaced faster than solutions created. We in Detroit are watching closely and working to follow suit. Our focus is on both prevention AND damage control, fighting to keep people in homes and finding ways to shelter those in the cold. Our fight is far from over, and the only long-term solution, we believe, involves acknowledgement by those in power of our Constitutional Rights. We REFUSE to make any more concessions. NOW the system purported to serve us must make concessions and do what’s right.