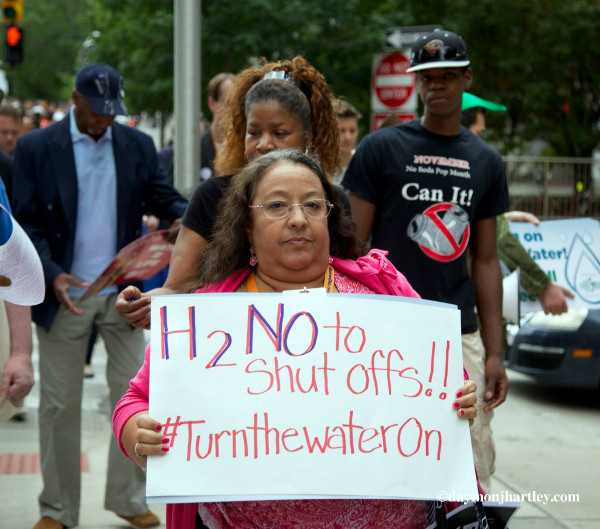 Protest to turn water back on in Detroit where 30,000 families had their water shut off.
PHOTO/DAYMONJHARTLEY.COM

DETROIT, MI — It is with profound sadness that I report the passing of Ms. Nicole Cannon, one of the chief plaintiffs in the Federal case in front of Judge Rhodes, to institute a temporary moratorium on water shutoffs. [Editor’s note: Thousands of Detroit families have had their water shut off for inability to pay the skyrocketing costs.] She has been disabled for years, struggling with a variety of medical conditions as she raised her children. Many might remember her on the bus with the United Nations reps and the rest of us, as we toured neighborhoods where water has been disconnected. We lost her Sunday morning, as many of us celebrated the life and times of Martin Luther King.

Some folks don’t think this water struggle amounts to much  . . . but they are powerfully wrong as it is truly a life and death matter. Who pays for this murder, the first of probably more to come? How much longer will this treachery go on? Sleep well, Ms. Nicole . . . you did the best you could as a voice for the voiceless and I promise . . . we will not forget your brave and selfless sacrifice.

She struggled to keep her water on for years and always wondered if there was a leak because of the high bills and degree of mold in the home. Her landlord, Tim Bankman,said there was not a leak and the Detroit Water and Sewerage Department would not come out for assessment. She recently entered into a payment plan with the Department where she paid $383 down,and $143, plus her monthly bill a month for two years. For September, her water bill was $241.27 which she would have to pay out of her $678 income. Her doctor advised her to move from the home because of the effect on her lungs, but she could not because, under HUD rules, she would be responsible for water bills on two homes which she obviously could not afford. Her child also has sinus problems due to the mold in the home.

She was a great activist. The struggle gave her a sense of purpose and accomplishment in her last months. What a system we live in. —Attorney Jerry Goldberg