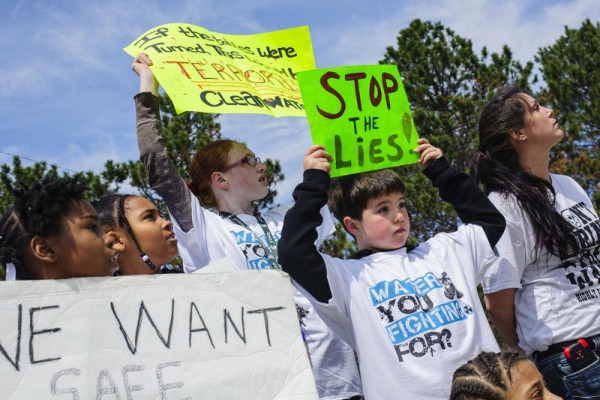 People are getting sick, losing hair, having immune system issues and rashes from the water in Flint, Michigan, and all this is on top of high rates.
PHOTO/COALITION FOR CLEAN WATER ON FACEBOOK

The struggle for safe, affordable water in Flint, MI is accelerating as local grassroots groupings form a coalition seeking relief from the court system. The dismantling of democracy as we know it, has made this fight that much more challenging. However, learning to live with life threatening toxic water brought on by a toxic system is not an option.  The following is a press release issued by the groups:

Multiple activist and support groups, churches, community organizations, concerned citizens and more have joined together to form the Coalition for Clean Water. The goal of the group is to fight for safe, clean, and affordable water for Flint citizens. We are currently not receiving clean, safe, or affordable water and we need to DEMAND action NOW.

With cancer causing trihalomethanes (TTHMs) typically on the rise in the warmer months, the focus of many (at City Hall) is the installation of granulated, activated carbon. Yet, Flint citizens received yet another TTHM violation notice with help not being implemented until later this summer and results to be seen 6-8 weeks later.

However, several citizens have received Department of Environmental Quality (DEQ) notices that their water contains Lead, Copper, and many other contaminants and sediments. The water is STILL NOT SAFE. According to 30-year water expert, Robert Bowcock, “lead is coming from your plumbing and fixtures due to the change in corrosive chemistry of the treated Flint River water. The change from stable Detroit water to the over-treated Flint River water is causing the metals to leach into the drinking water.” This is NOT safe and NOT acceptable. We encourage all citizens, even those with clear water, to get their water tested and to see your physician with health concerns.

It has been over a year since the switch to using the Flint River as our drinking water source and many people are still getting sick, losing hair, having immune system issues, rashes and also have to purchase bottled water on top of the high rates. The chemical mix is not right. The water is not right. This is not right.

We have retained attorney Trachelle Young to begin legal action to get us relief from the high rates and low-quality water for Flint. According to Attorney Young, “We are going to go legal,” she said. “And we are going to go fast and furious because we are on a mission.”

Donations to the Coalition’s legal fund can be made at local Credit Union locations under the name of “Coalition for Clean Water.” All proceeds go to legal research, legal fees and bringing in experts to aid our case as needed. Donations can also be made through GoFundMe at www.gofundme.com/tshv54.

Research and information can be found at www.WaterYouFightingFor.com

One thought on “Coalition for clean water: Flint is not in the clear”