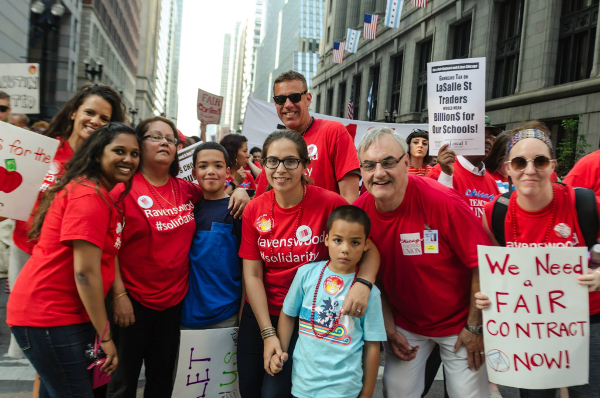 Teachers protest for a fair contract and a just Chicago.
Photo/Sarah Jane Rhee

CHICAGO, IL — Illinois, and particularly Chicago, are notorious for their brazen addiction to wealth, corruption and waste. Meanwhile, there are now over 20,000 homeless students in Chicago Public Schools.  Chicago Coalition for the Homeless estimates that around 12,000 young people living on their own are on Chicago’s streets.  Alongside this, Forbes lists 18 billionaires from Chicago, headed by the Crown family, with $4.1 billion.

The Chicago Public School board, run by billionaire bankers, is militarizing and demolishing public education and privatizing everything in sight.  In the new hi-tech economy, the billionaire class needs fewer workers, and they won’t educate people they don’t need.  Breaking the teachers’ union and funneling pension money into their own pockets illustrates the end of their need for a stable workforce. The pension struggle is a key front in the struggle for the kind of society that can provide for all.