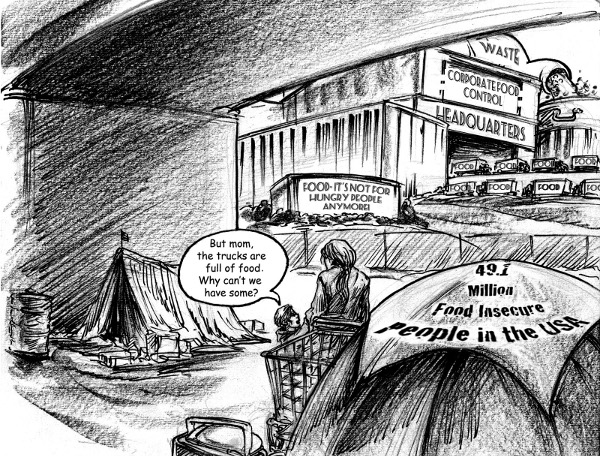 If you had to make a choice between buying food or paying your bills, what choice would you make? This is the dilemma millions of Americans face. According to a recent report in USA Today, eight million Baby Boomers between the ages of 50 and 64 are especially vulnerable because they are not eligible for federal programs.

Over the past three years, more than 46 million people have been on the SNAP (Supplemental Nutrition Assistance Program), an all time high, while Congress passes laws to cut the program. The latest statistics from 2013 show that 49.1 million Americans have trouble putting food on the table, affecting 20 million children. Parents and grandparents report going hungry so their children and grandchildren can eat.

And yet, food is abundant. Our planet has seven billion people and produces enough food to feed 10 billion. The problem is that the food is privately owned, and many people do not have the money to buy it.

That private ownership of food by the giant conglomerates is in the way of feeding people is shown by the fact that 40 percent of what is produced in the US is not eaten and thrown out. Some of it never leaves the fields or is disposed of before delivery to the market. Businesses discard perfectly edible food in locked garbage bins with strict orders to workers not to take it or lose their jobs. Many of these workers are low wage and the very people going hungry. Food that is kept off the market lowers the supply and has the effect of raising the price of the food we buy. And the private owners cannot give away the food without threatening their ability to sell it.

To the capitalist ruling class that owns the giant corporations, if our labor is not needed, we are worthless and can be starved or cast aside like yesterday’s news. Automation creates an abundance of food and other necessities, but eliminates jobs, lowers the value of labor, causes real wages to fall and cheapens life. If one earns their daily bread from money obtained through the sale of their labor power, and the value of their labor power is heading toward zero because the robot is doing the producing, then the system is going to push people into starvation.

It’s obvious that this cannot continue. It begs the moral question: Should a system that starves children and the elderly by the millions because they cannot afford to buy food be allowed to continue? As we ponder that question, some of us may naturally wish a return to earlier, less troubled days when good paying jobs were plentiful. But the jobs aren’t coming back. The corporations won’t pay workers to do what can be done faster and cheaper by automation.

The capitalists know it is just a matter of time before a serious demand is raised that government “of, for, and by the people” take over the corporations in order to feed “We The People.” We must start raising that demand now. Because, when that day comes we will have begun securing life and a happy future, not just for ourselves, but all of humanity.