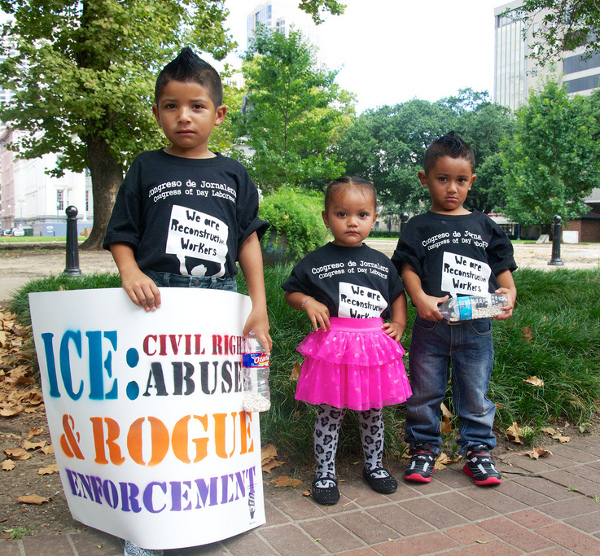 The billionaire Donald Trump, and his racist rants against the immigrant worker are just the tip of the iceberg. Trump is trying to tap into and stir up a rising fascist movement in America. This fascist movement is poised to attack the poorest workers of every color and nationality in an effort to divide and conquer the struggle for a democratic, cooperative America where everyone’s needs are met. We have to ask, why now?

In America today, 80% of the population face near poverty. Underlying this poverty is an economy based on the steady introduction by the owning class of labor replacing robots and computers into the workplace. The end result for a growing numbers of workers is poverty wage, dead end jobs, and complete destitution. This same process is occurring throughout the globe and is forcing the migration of workers worldwide.

In a previous period, when the capitalist market was expanding, US borders were opened to immigrants. The capitalists needed an expanding workforce to keep industrial production going. Today, robots and computers are producing an abundance of necessaries of life, but with very few workers.

Capitalism, as a system of buying and selling of human labor power, is coming to an end. What kind of society will replace it? Will it be a fascist society where a handful of billionaires wallow in splendor while impoverished workers starve in the streets? Or will it be a new cooperative society where the abundance the robots are producing is distributed to all based on need. In such a society every human being would be free to contribute his or her talents and skills to the creation of a better world. A movement for such a world can be successful today.

To stop this movement, the rulers are forced to implement a corporate fascist dictatorship. There isn’t any other way to control millions of workers who are hungry, homeless, without water, healthcare or utilities, and who are beginning to demand their necessaries of life whether they can pay or not.

Thus we see that a militarized police state in the service of the corporations is on the rise. A fascist movement, that billionaires like Donald Trump are cultivating and striving to emerge as the leaders of, is the next step for the billionaire ruling class. History shows that as fascist movements grow, they attract rich and poor, and those in every corner of the government, including the military. Such a movement in America will thrive on the poverty, confusion and cultivated color hatred of a section of workers.

Revolutionaries must go on the offensive. They must show that every attack on any worker, whether they be immigrant, homeless, young or old, Black, white, brown or red, is an attack on the entire working class. In this way, revolutionaries can gather together all who can be united around their common economic interests and a vision of a new cooperative society. This is the path to a new future. Time is of the essence.