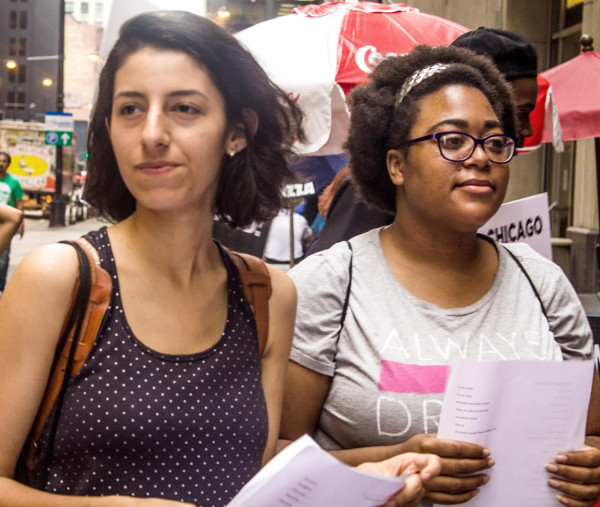 Chicago Fight for $15 activists gather in solidarity with New York workers whose $15 demand is before
the New York Labor Board.
PHOTO/BOB SIMPSON

There is an old saying, “a hungry belly has no color.” This is the reality the ruling class fears. While starving the workers it no longer needs to exploit for profit, it must sow division among them. People are beginning to wake up to the reality that they are in the same leaking economic boat, and have every reason to unify. To counter this, the capitalist billionaire class uses its historical weapons, nationality, color and the myth of race, and targeted fascist terror, to keep people divided. In reality, there is only the human race.

People of all colors and backgrounds are being pushed out of the economy. Vast computerized production is replacing workers forever, and they are thrown into contingent and part-time work, or out of work altogether, into insecurity, poverty, and homelessness. People who once had stable jobs and housing find themselves living in their vehicles or in the streets. This is irreversible, because this labor-replacing technology can only increase. The only solution is a new economic system compatible with the productive forces of today and the future. The ruling class is using all the weapons in its arsenal to prevent this.

It is in the interests of the exploiters to keep us divided and confused. Given American history, to do so they must attack the working class in such a way as to first isolate the Black worker, and make the attack seem to only be about race. A whole section of the working class, of all backgrounds and colors, is being thrown out of production and out of work forever.  What they all have in common is that they have been forced out of society and, if united politically, are a threat to the ruling class. The ruling class must impose fascism to suppress their demands.

As long as the capitalists needed workers they were willing to concede certain rights to the workers, while maintaining an uneven system of laws and practices to keep the class divided. The rule of capitalist profit and private property is colorblind. It will not grant anything to anyone on the basis of need. It can only throw up artificial barriers between the abundance the new technology creates and those who need what it produces, and use fascist terror to enforce this.

Class unity can begin when workers who are equally impoverished unite around their common interests: the need for housing, food, health care, education and all those things that not only allow them to survive but to lead a creative and socially fulfilled life. These are human needs and have no color or nationality. They can only be realized under an economic system based on cooperation and distribution according to need. The task of the revolutionary is to promote class unity in the struggle for this new society.