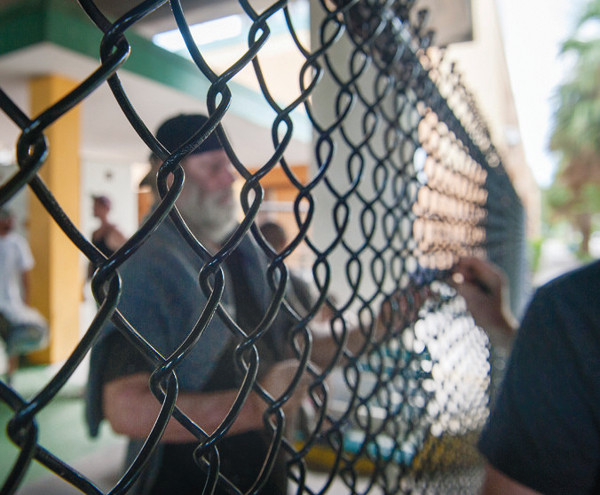 A homeless man speaks to reporters from inside a prison-like “courtyard” surrounded by a wire fence at a shelter in St. Petersburg, FL.
PHOTO/CHRIS MCGONIGAL, THE HUFFINGTON POST

ST. PETERSBURG, FL — A statewide grass roots movement of homeless people, formerly homeless, and their supporters is forming in Florida to resist those who criminalize folks simply because they are homeless. Groups in several cities are uniting around the idea of fighting back and not allowing the non-profit industrial complex to sell out the homeless community simply because they don’t want to “rock the boat” and lose their funding. Homeless folks who have been criminalized by the system and “left out to hang” by non-profits are coming together in cities including St. Petersburg, Tampa, Ft. Lauderdale, Miami, Orlando, Jacksonville, Lakeland, Sarasota, Brooksville, and Gainesville. They are from groups such as Living Water, the Well, the Refuge, Speak Up Florida, the Poor People’s Economic Human Rights Campaign Florida, Hearts for God Worship Center, Transitions Support Group, Revolutionary Caucus, Revolutionary Road Radio Show, Food Not Bombs, and Students for a Democratic Society (USFSP).

The movement organizes around the premise that housing is a human right, along with food, jobs, health care, and freedom of speech and movement. We are standing up against the various “Homeless Coalitions” run by non-profits, businesses, and government bureaucrats that marginalize and dismiss opposing voices. We resist those who attempt to remove or hide the homeless community by putting them in modern concentration camps, detention facilities, or jail-style shelters, such as the so called “Safe Harbor” in Pinellas County – or cage them in small fenced-in areas with 50 or more people like St. Vincent De Paul. We speak out against charlatans like “Dr.” Marbut, the Joseph Mengele of the homeless, who promote jail-style shelters. We will fight municipalities when they arrest Food Not Bombs or Good Samaritans, like the 90 year-old gentleman arrested in Ft. Lauderdale earlier this year for sharing food with the homeless community. This must stop!!

We are forming to speak, act, protest, and disobey injustices against homeless and poor folks by the corporate state dominating these cities. We will make cities a safe and welcoming place for all, including the homeless, by any means necessary. We will not stand by, but will struggle in solidarity and under the leadership of this class that includes the poor and homeless. We intend to demand that all “Homeless Coalitions” adhere to the federal “Housing First” policy, and include at least 50% homeless and formerly homeless in their leadership. We will challenge hate crimes and police brutality against the homeless, demand a comprehensive Homeless Bill of Rights, and form homeless and temp worker unions and worker centers, beginning in St. Petersburg.

We will no longer tolerate marginalization. Too many homeless are dying. We intend to bring human rights violations to any and all the courts or agencies that would hear us, both here and abroad.

One thought on “Grassroots movement of homeless is forming”