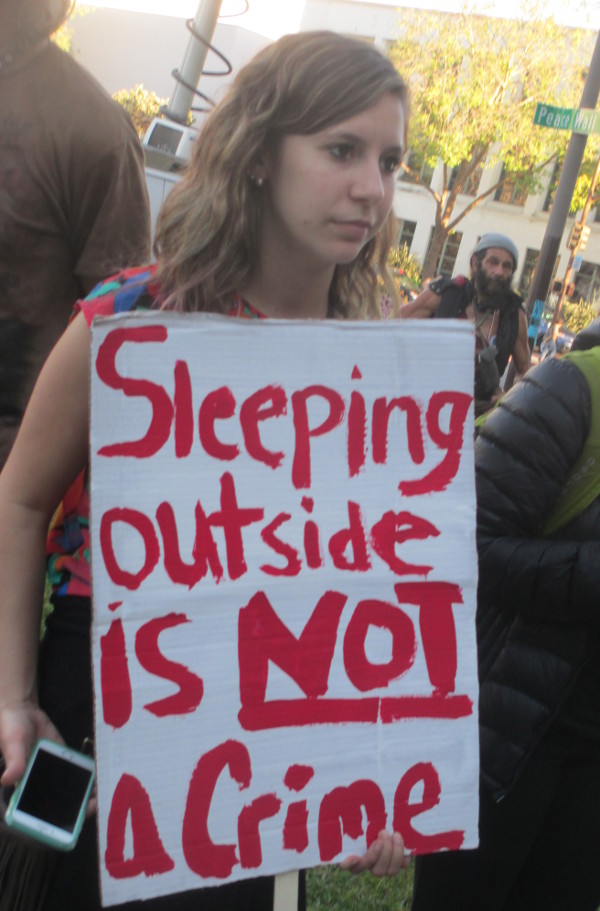 Protesters at a march and rally against a proposed law that would criminalize homeless people in Berkeley, CA.
PHOTO/SARAH MENEFEE

Editor’s note: This is a talk given by Julianna Cheng at the release event for the Coalition of Homeless study titled, “Punishing the Poorest.”

SAN FRANCISCO, CA — I have been homeless for the past three years, just moving out of homelessness recently. I’m here to talk to you about my personal experiences with homelessness here in San Francisco.

Being homeless is a constant struggle. I slept in the streets, in BART stations, the Embarcadero, in Golden Gate Park. You are constantly shuffled around and banned from public spaces. Laws are enforced against us, like the sit/lie law, which has been condemned by the United Nations. I myself have been arrested for ‘attempt to sleep’. They took all my belongings, under 647-e, which says that any structure used for camping or ‘lodging’ can be confiscated, including a blanket, a sleeping bag or even cardboard! The police take gear that you need to keep warm, and it isn’t returned to you, it’s kept as ‘evidence’ and destroyed, and you’re back out on the street in the middle of the night, in the cold.

Sleep was a constant issue, finding a place to sleep, having time to sleep without being harassed. Sleep deprivation is a form of torture. The DPW (Department of Public Works) constantly sprayed the streets with chemicals that make you sick. I was pregnant at the time, and another young woman I knew miscarried soon after a spraying. People with emphysema, asthma and other breathing issues got severely sick each time they sprayed. I’ve seen people kicked awake by the police in the morning. The lack of space, of privacy in our personal lives, the lack of toilets, is a huge issue.

People are denied access to food, shelter and the necessities of survival in San Francisco, where there truly is plenty of resources. Think how many houses are empty while people are on the streets. The criminalization of homelessness is on the rise.

I am currently living in the Tenderloin and I observe police interactions daily. Most of the time it’s citations and harassment of people who are just trying to survive.  When I walk down the street I hear people, tourists, saying: “Such blatant inequality!  To have this glitzy shopping area just one or two blocks away from people living in such poverty, it’s uncivilized.” Gentrification and evictions are pushing out working-class families, especially people of color, and also artists and poets and musicians. Everything that makes San Francisco great is being forced out. These things are creating more poverty and homelessness. They are turning the city into a playground for the rich and elite.

The 83rd Annual Conference of Mayors is this weekend. Let’s go there and tell our mayor:  We do not want to fund and build a new jail! We do not want more police on our streets. We want more truly affordable housing to help end homelessness, and an end to all the evictions.

It is time for us to take back the city and put people over profit.  Let us put humanity first!