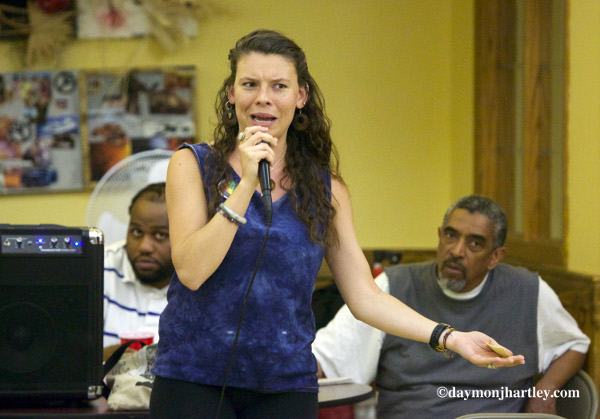 Mariah Amber Ureta at a water conference in Detroit.
PHOTO/DAYMONJHARTLEY.COM

With that being said, there were primarily corporate representatives and local politicians present. Thankfully, some friends and I from MICATS (Michigan Coalition Against Tar Sands) found some leftover badges and were able to get into the conference, held at the Grand Hotel. We were there the day before for the Oil & Water Don’t Mix campaign’s rally, in partnership with Food & Water Watch, to Shut Down Line 5. Deep down, I feel that Governor Snyder does not feel the same sense of urgency that I do for protecting “Pure Michigan”. This is why in front of about 1,700 people, I stood and declared:

“To keep Michigan pure, it’s time to shut down Line 5. We can actually give people jobs removing the 62-year old pipeline beneath the Straits of Mackinac. Shut down Line 5 please, and stop the Detroit water shut offs, they started today, by the way.” My friends stood by me and shouted, “Shut down Line 5!” while we were escorted out of the Grand Hotel.

Line 5 poses too great of risks to the Great Lakes, which provides drinking water for 35 million people, and is home to numerous flora and fauna, essential to life as we know it.

In 2010, Enbridge [the giant energy corporation] allowed toxic tar sands oil to leak into the Kalamazoo River for 17 hours before responding. July 25 marks the 5-year anniversary of this spill; the communities of Marshall, Battle Creek, and Galesburg have yet to recover from this disaster. There was a “Remember the Kalamazoo 5-Year Anniversary” event in Battle Creek, MI. In addition, Enbridge’s shaky track record and dirty business practices of manipulating people should be enough of a case to shut down this pipeline.

Enbridge’s Line 5 is one pinhole leak away from wreaking havoc on the Great Lakes. To Governor Snyder, we do not need another Kalamazoo River oil spill, shut down Line 5!

2 thoughts on “Shut down risky oil and gas pipeline”