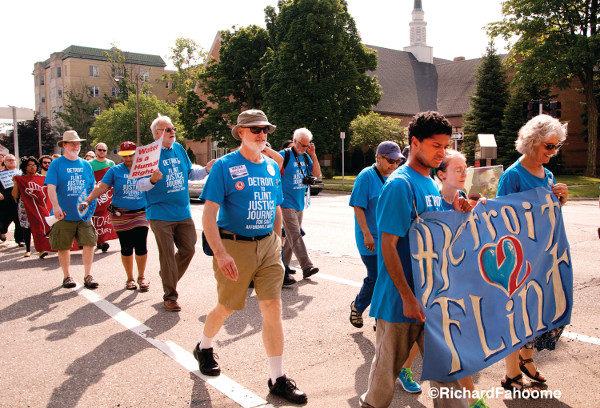 Marchers on a “Water Justice Journey” from Detroit, where thousands have had their water cut off, to Flint, where people are becoming ill from their water.
PHOTO/FAHOOME

The People’s Tribune interviewed Kim Redigan, Vice Chair of Michigan Coalition for Human Rights, who helped organize a 70-mile march from Detroit to Flint, MI,  to unite people statewide in a fight for water as a human right. The “Water Justice Journey” was organized by the People’s Water Board Coalition, the Highland Park Human Rights Coalition, and the Flint Clean Water Coalition.

People’s Tribune: Tell us about the Water Justice Journey.
Kim Redigan: The march came out of the International Gathering on Water and Housing held in Detroit in May. It began in Detroit where tens of thousands have had their water shut off and the city council passed the Water Affordability Plan in 2005, which was never implemented. We felt the need to connect stories from Detroit, Highland Park, Flint, and across the state.
The walk was the thread to weave together a series of important public events that highlighted people working on the front lines—community activists, public health workers, attorneys, pastors, and people committed to water justice, some of whom have been personally affected by unclean and unaffordable water.

PT: What were some highlights of the march?
KR: The key events included: the sendoff from Detroit, a cultural event and town hall meeting in Highland Park which has been threatened with mass shut offs, a public cross-county speakout in Pontiac where people from 20 cities assembled, and a rally in Flint (where residents report serious health problems related to water from the Flint River). The focus was on connecting communities and bringing people together to organize for clean, affordable water and to uphold water as a human right that should be held as a common rather than a commodity. Then we boarded buses to Lansing where we hoped to meet with the governor to present him with thousands of signed cards calling for legislation to guarantee water as a human right.

PT: Did you meet with Governor Snyder?
KR: No. He sent his liaison instead. We decided to hold on to the cards until we get a meeting with the governor.

PT: What are the demands of the People’s Water Board?
KR: 1) STOP the water shut offs and restore water. 2) An income based water affordability plan like the one passed by the Detroit City Council in 2005 that was never implemented. We have income based housing and food programs. We should have the same for water. The UN says only 2.5-3% of income should be spent on water. Rates are increasing even in rural and suburban areas. 3) And finally, we say NO, NO, NO to privatization . . . water must be held as a common good. Water is a human right. It must be guaranteed even to those without income. This is a global issue.

PT: How does Michigan’s Emergency Manager system affect this struggle?
KR: This is how privatization (of water) was introduced. People don’t realize that this is coming to a suburb near them. Every major Black city in Michigan has been brought under the Emergency Manager system. That was done deliberately to divide and conquer.  But people are waking up to the fact that their vote does not count.

One thought on “Water Justice Journey”