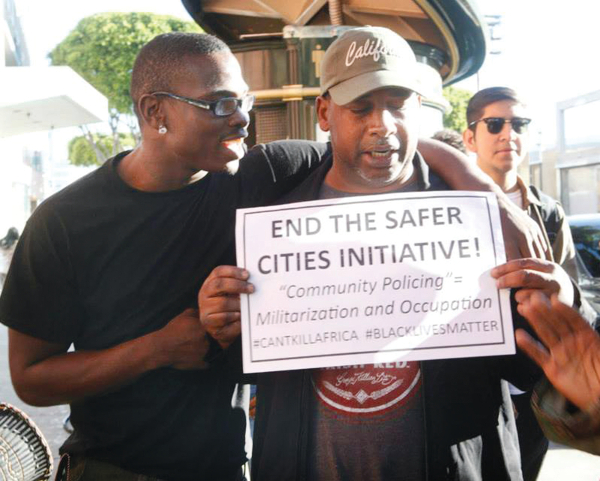 This rally is protesting the police killing of “Africa,” a homeless man living in a tent on Skid Row, the most heavily policed area in the country where homeless people are cited for “crimes” like walking too fast or slow, eating or standing.
PHOTO/LYNN ROSSI

LOS ANGELES, CA — September 26 is the 9th anniversary of the Safer Cities Initiative (S.C.I). This “initiative,” under the guise of “fighting crime,” has increased the number of police in the Skid Row section of downtown Los Angeles with its 12,000 residents, to create the most heavily policed area in the world, higher than Baghdad, Iraq.

In its first year, the Los Angeles Police Department (LAPD) issued 12,000 citations, primarily signal (“walk”/”don’t walk”). The LAPD also made 750 arrests each month, mostly for drug violations, many resulting in plea bargaining and leaving the violator with a criminal record, thus ineligible for drug treatment or even food stamps.

In the Skid Row community of Los Angeles, “Walking too fast, walking too slow, eating and standing have all been criminalized.” (Clyde Woods, Traps, Skid Row and Katrina)

This stepped up police presence in Skid Row is the only answer the state has to the plight of a new class of poverty-stricken, formerly productive workers. These residents are not so much castoffs of the old society, but a new class created by robotics and the crumbs from McJobs. According to the Los Angeles Times, county-wide, the number of people sleeping in outdoor encampments or vehicles jumped 85% in the past two years.

Deindustrialization and new automated technologies in Los Angeles, of auto, rubber and shipbuilding, have created extremely powerful groups of real estate and financial speculators who are promoting a militarized police department through the Safer Cities Initiative to protect private property.

LACAN, a civil rights organization located in Skid Row, demands the LAPD immediately: 1. Stop the tickets. 2. Downsize the # of police. 3. Use “Smart Teams” (mental health professionals) for response to possible violation by persons with mental illness.

S.C.I. “legally annihilates the very spaces the homeless must rely on for everyday life in the post-welfare world” (Don Mitchell, Homelessness, American Style). S.C.I. has also been used in other parts of Los Angeles such as Venice and Hollywood.

The city’s budget for homelessness is $100 million with $87 million of this money going to the police. With each economic downturn in Los Angeles, the response to homelessness and poverty becomes more militarized, with the LAPD’s tanks, sound canons and violence increasingly used on every protest and independent action.

Thinly veiled “democracy for the rich” has become violent police rule for the poor. With every small improvement in the economy, “progressive” Democratic politicians such as Mayor Eric Garcetti, promise to adjust the harmful aspects of S.C.I. but not to abolish it. The “improvements” are cosmetic, inconsequential or never followed up on. Just last week Garcetti informed civil rights activists that he would not abolish the S.C.I.

On skid row, with the greatest number of police per square mile of any community in the city, SCI has been ineffectual in its supposed purpose of “fighting crime.” Across Los Angeles a nascent movement is recognizing the battle lines for a city where the hungry are fed, the homeless are housed and young people are taught.