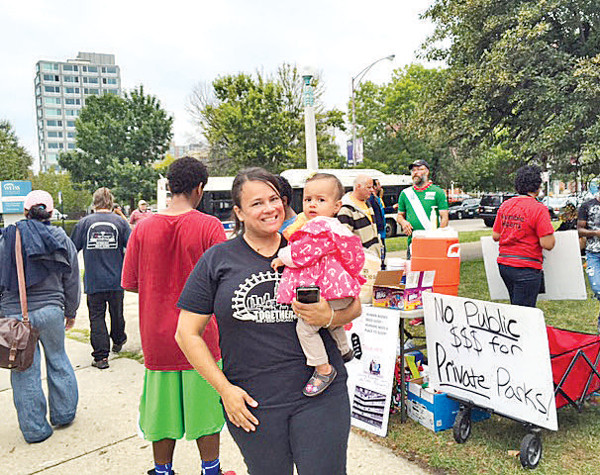 Protest in the Uptown neighborhood in Chicago to resist the growing anti-homeless ordinances and harassment.
PHOTO/LESLIE WILLIS

CHICAGO, IL —“Human bodies need sleep—Humans need a place to sleep!” read the sign in front of a Tent City in Chicago’s Uptown neighborhood.
Hot dogs off the grill fed the crowd of homeless people that gathered for a protest. Those who had tents pitched them on a grassy area near the viaducts where they had been allowed to sleep until the city forced them out, using the excuse of upcoming lakefront concerts.

“I don’t understand the harm in allowing them to rest their tired feet at the end of the night by sleeping under a tree? I don’t understand why you have taken a personal vindictive against someone who has no money in their pocket to pay for a room or to provide a home for themselves? Why has the homeless become your enemy? Why do you pick on them by demanding the police department wake up, kick out and force hardship on a man or woman who has no place to go?” wrote Tent City organizer, Carol Boyd, in a letter to the Chicago Park District.

Everyone at the protest had hardships that were painful to even hear about, let alone bear: from endless rounds of bureaucracy that never result in aid to unbelievable cruelty at the hands of our government. One young woman had her baby taken away from her at the hospital, because she could not find a shelter that would take them both.

Such hardships are a motivating force for people to join together and organize to resist the growing anti-homeless ordinances and harassment, and assert the natural rights of all human beings to have a place to sleep undisturbed through the night.

During the evening, Chicago Police threatened to arrest the protesters. Organizers asserted their First Amendment right to protest in a “public right of way,” and the police backed off.  “Tonight is a victory, but it’s only the beginning of our fight,” Carol Boyd told a cheering crowd, despite the drenching rain. As soon as the protest was over, however, the police moved in, uprooting the homeless from the area.

Organizers point to Alderman James Cappleman as a driving force behind the harassment of homeless people in Uptown to accommodate wealthy property developers who are drooling over the dollars to be made off lakefront properties. This story is repeated throughout the city. Property developers’ desires come before the needs of Chicago’s people.

Anyone standing in the way of the needs of these large private property owners is considered an “enemy’ and apparently there are no human rights that they have to respect. As more and more of us find our situations deteriorating, something definitely must give.  Besides the growing homelessness, most people are fighting a losing battle attempting to make the rent, the house note, and take care of all the other needs that we humans have.

What if we the people could confiscate the land that is now in the hands of large private property developers and use it to provide housing for all who really need it whether they have money or not. Isn’t it time to assert this new thinking: that housing is a human right that no one should be allowed to deny.

One thought on “Housing is a human right”