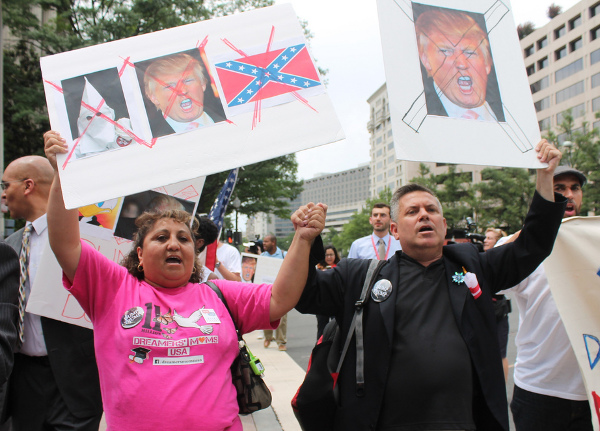 TAMPA, FL — Trump’s latest call for pogroms against about 12 million people, including “anchor babies” who are half this amount, and deporting all undocumented workers in the US, is unconstitutional to say the least. The fact is that the most people ever deported in a year in the US was under Obama. But who has foreseen the wall being built on the Mexican border as Bush did, and the quarter of a million people taken through the process of each immigrant having a hearing, right to appeal, legal counsel, etc. To deport 12 million that way would take 40 years. Trump wants to make an executive order and now wants the rest of the wall built, and for Mexico to foot the bill. He fails to mention a partial wall has already been built.

Trump probably wants all 12 million people put in concentration or FEMA camps, and processed rapidly to be sent back. Many will likely face death as refugees who are supposed to be protected by international norms, if they return to Central America, to countries destabilized by the US since the 1950s. This was begun by Reagan, and continued with the US backed coup against democratically-elected progressive Zelaya in 09’ in Honduras.

Back in the US-Mexican war, the northern half of Mexico was taken mostly by conquest, and this was expressly to expand slavery. Women were raped, civilians burned in churches for being Catholic or Mexican, to the point that many of the Irish recruited on the American side ended up changing sides. To the many of these Mexicans returning to their ancestral land, or having been there all along, being called illegal is ironic, let alone Native Americans whose land was stolen by the US as well.

Whether or not you agree with Obamacare, 90% of Americans signed up for it As one of Trump’s executive orders, he wants to repeal this and make all those Americans covered by insurance pay expensive bills again to survive. Trump is a billionaire and is not in touch with the working class of the US, even if he pretends to be anti-establishment. Trump’s idea of strong-arm politics could lead us into WWIII. His plan to demand from Putin, in his first meeting with him, that he deport Snowden, to face execution or imprisonment in the US, is not a good one to say the least.

Having studied what happened in Germany, I see many similarities with Trump. People see Trump as a joke, underestimate him, ignore his rhetoric, and do not see the danger of what can happen if he takes power. For Trump to fulfill his promises he would have to make himself dictator and would start war, possibly even a civil war, as millions of people would be rounded up and prepared for deportation. If they come for the Mexicans they will eventually come for you It’s time once and for all for Trump to be exposed and shunned in our political process.