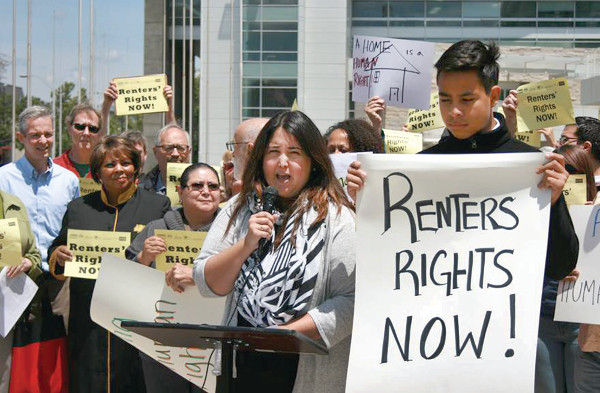 Renters’ protest in San Jose, California, home of the billion dollar high tech industry. Skyrocketing rents of up to $3000 a month are forcing low-wage workers out.
PHOTO/ KRISTIN PEDDERSON

SAN JOSE, CA — People in San Jose, California and elsewhere in the Silicon Valley area have erupted in a surge of organizing activity around skyrocketing rents and deteriorating housing. Their desperation had been building for years and finally reached a tipping point in May, motivating Downtown Councilmember Raul Peralez to release a memo calling for rent reform. Hundreds rallied to support new rent controls, while the Mayor and other Councilmembers hurried to jump on board. According to poll results released in August, 72% of San Jose residents now support a strict 2% cap on annual rent increases in the city.

The crisis in housing and homelessness in Silicon Valley has been severe since the 1980s, but recently it has become extreme. Over time, as corporations replaced workers with automation, they more and more refuse to pay taxes to support housing programs for workers they do not need. In a capitalist economy, they cannot support policies that do not increase their profits. As a result the government is forced to starve the federal Section 8 housing program, to the point where the Housing Authority proposes new cutbacks almost every year.

In the meantime, a temporary boom in demand for highly paid technology workers has driven housing prices and rents through the roof. One recent report showed average rent for a two-bedroom San Jose apartment is now $2917 a month. The surge in median incomes is also pushing up rents for “affordable” tax credit housing to the point where fixed-income seniors and people with disabilities fear being forced out of their homes. Many case workers simply advise seniors and disabled to leave the area (and their support systems) because there is no housing available here for people like them.

Stopping the cuts and enacting stricter rent controls by themselves will not end the crisis, but they are an opportunity to engage and educate the people around their true class interests. People without property have nothing in common with capitalist corporations that prey on them to make money. Corporations are refusing to house people unless they can make a profit by doing so. Government refuses to help because it has been more and more taken over by the corporations. This is a systemic breakdown and requires a systemic solution.

We cannot change anything unless we fight for our rights, including our right to decent, safe, affordable housing for ourselves and our families. We have to demand stronger rent control and restoration of every program, but we need to understand that these are only temporary fixes. The real victory is our unity, and our realization that the system is abandoning us and we need to rely on one another to survive. These are the first steps on the path to building the new society we need and deserve, one based on human rights instead of private profit.