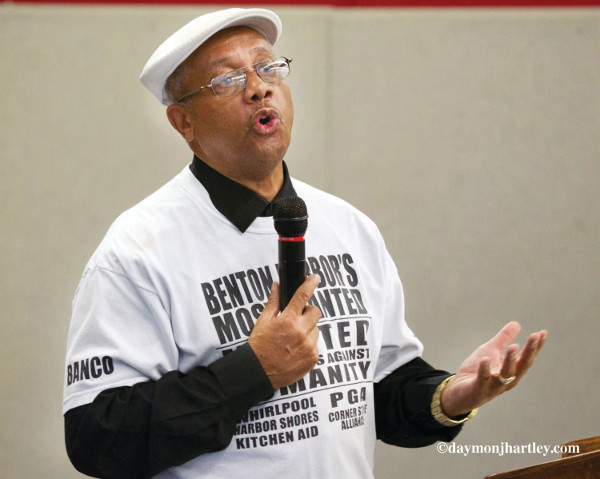 Editor’s note: Rev. Edward Pinkney, convicted without evidence in a struggle against corporate power in Benton Harbor, MI, has contributed monthly articles to the People’s Tribune for the past ten years. We regret that he was unable to do so this month.

CHICAGO, IL — Rev. Edward Pinkney was recently moved by the Michigan Department of Corrections from Lakeland prison, near his home, to Marquette prison, almost 500 miles away, in the Michigan Upper Peninsula, near Lake Superior. Some call the prisons in this region “America’s Siberia” because the distance effectively cuts inmates off from the outside world.
Now Rev. Pinkney’s wife, Dorothy, is concerned about his wellbeing. “His phone privileges were suddenly taken away and I cannot talk to him,” she said. “I’m also concerned about his health. One cell he was in had a heavy black mold infestation that made him ill. He is awakened by guards with flashlights in his face several times every night, depriving him of sleep,” she added.

What’s behind the incarceration of Rev. Pinkney? It is the rising corporate dictatorship in Benton Harbor, throughout the state of Michigan and the U.S.

Ever since Whirlpool, the corporate giant that runs Benton Harbor, permanently laid off its factory workforce years ago, it has been on a mission to remove the growing poor it created while gentrifying the city into a profitable playground for the rich. Whirlpool was assisted by the governor, who appointed dictatorial emergency managers in in Michigan. These “managers” replace elected city officials. They are there to guarantee the corporate will to sell off city assets to the highest bidder.

Versions of this process are taking place all over the country and Rev. Pinkney, along with others in his community, have been sounding the alarm. As Rev. Pinkney once said, Benton Harbor is “the testing ground to see what they can get away with.” Whirlpool, for example, got away with not paying city taxes and stealing city resources. All along the way, Rev. Pinkney exposed what the corporate dictatorship in Benton Harbor was doing. He led the community’s fight against the emergency managers that were selling off the city. He led the fight of the poor for justice in the courts. He soon became the voice of the homeless and destitute. Rev. Pinkney was singled out because the powers that be had to stop the growing movement in Benton Harbor. The message is clear: if you oppose corporate rule and stand up for the people, this is what you’ll get.

As automation throws millions of workers into the streets permanently, especially in Rust Belt states like Michigan, Rev. Pinkney symbolizes the new kind of leader emerging in the country. His vision is to end the corporate-government dictatorship by uniting all who can be united in a struggle for a new, truly democratic, society where everyone can live happy, fulfilled lives.

The movement must defend its leaders. We urge you to get your community organizations to connect their struggle with the struggle to free Rev. Pinkney. Visit bhbanco.org and justice4pinkney.org to learn more about what you can do.