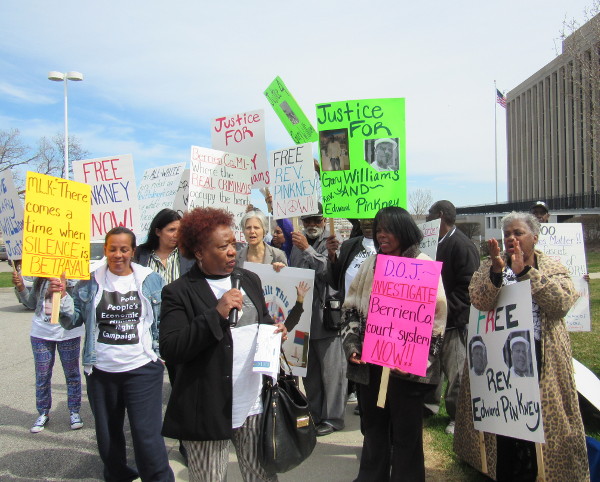 Dorothy Pinkney speaks at a rally outside the Berrien County Courthouse after Rev. Pinkney’s appeals regarding his conviction and imprisonment.
Photo/People’s Tribune

Fascism, the merger of the corporations and government, is developing further in Michigan, as is the resistance to it.

Once the robots began replacing workers in factories and poverty began to spread, the corporations began to impose fascism to contain the workers and guarantee their profits.

As a result, a movement arose. In Benton Harbor, one of the first cities to get Emergency Managers, the people fought to oust their Emergency Managers. They also utilized the electoral process to oust politicians that represented the big corporations such as Whirlpool. Rev. Pinkney, a leader of this movement and a spokesperson for the most destitute workers, was jailed on phony charges in an attempt to stop the movement. Much to the dismay of corporate power, the movement has not stopped. It is growing.

The same process is unfolding in other Michigan cities. Emergency Managers, who gave the green light for water cutoffs to thousands in Detroit and the poisoning of the water in Flint, now stand exposed as agents of the corporate-state.

The struggle is showing that capitalism, a system based on the private property interests of the few, is a dying system. It can’t and won’t provide for those it no longer can exploit. It offers only fascism. The question is: how are people to survive?

Use the People’s Tribune to educate about fascism, the attack on our leaders, the vision of the new society—and to defend Rev. Pinkney. A movement has to defend its leaders.