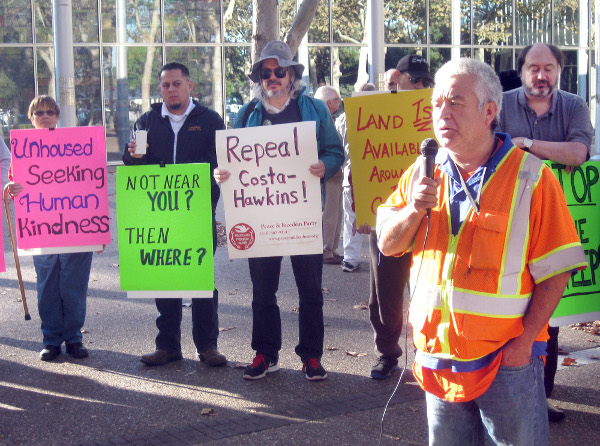 Salvador Munoz of the Laborers Local 270 speaks at rally against displacement in Silicon Valley.
PHOTO/SANDY PERRY

SAN JOSE, CA — Tenants and members of the homeless community protested early in the morning outside the hearing of the California Senate Committee on Transportation and Housing on November 12 at the County Building in San Jose, California.

Tens of thousands of low-income seniors, people with disabilities, and working people are being forced out of their Silicon Valley homes, while Congress and the State Legislature have not taken effective action to stop the crisis. Rents in San Jose have risen 10% or more every year since 2010.

The following speakers at the rally were interviewed by the Peoples Tribune:

Salvador Muñoz, Business Agent Local 270 Laborers International Union of North America:  “The laborers are the lowest paid workers in the construction industry.  They help build houses and don’t make enough to rent housing in this area.  They have to live far from here and so they are already tired when they get here.  Some of them sleep in their cars.  They have to be away from their families a lot and it causes social problems.  We have the right to live where we work!”

Shirley Stager, member SEIU, Low-Income Self-Help Center and Silicon Valley Rising:  “I have a 35-year-old son with his own infant son who have to live with me because they can’t afford a place even when he is working.  I am losing four neighbors because their rent was jacked up from $1700 – 2200.  I hear from my co-workers for the state that their rents are increasing, although we are not receiving any pay increases.  Although we have some support on the San Jose City Council for rent control and renter’s rights, there is a lot of influence from big developers also.  This is our town, now Greedsville.”

Pastor Raquel Ordonez from Exodus to Serenity Ministry: “We have faced three evictions in three months.  We operate safe houses to keep people off the streets and bring about transformation in their lives.  We give life skills education, help in restoration court, assist in job placement – we rebuild lives.

“The first one was a safe house in Stockton with eight women and four children; one of them used to live in the former Jungle homeless encampment in San Jose, with a 4-year-old that was born in the camp.  The house is owned by sisters in trust and they decided to sell – there was no just cause for our eviction.  We live by faith and prayer; an attorney came to help.

“The second eviction was a co-ed home in San Jose with four children, two women and seven men that were all homeless.  One has a housing voucher who can’t find a place.  We have been there for three years and were served with a 60-day notice.  The owner wants to divide the house into sections and get $5000 a month instead of the $2650 that she is getting now.

“The third eviction was my own home; I got a 90-day notice because the owner is going to sell.  I am trying to get them to wait until February so that I can use my tax refund to get into another place.”