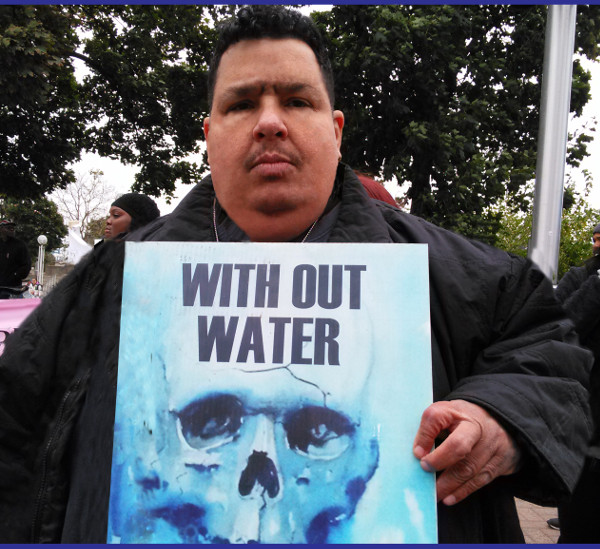 HIGHLAND PARK, MI — It is not a choice made, this birth. It is the direct result of the implantation of injustices, fertilized by greed and unconcern, that impregnates certain individuals in life when injustices fall on their door step, and a realization that existence and humanity as a whole are under attack, and that the powers that be have no respect for the people, the land or harmony of life and earth.

This involuntary manifestation occurs in these particular individuals as injustice sparks consciousness, and their eyes now open, they not only begin to see what was once hidden to them in the darkness but their senses become awakened to the pains of the people, community and world. They know what others seem to be blind to , that there is a war in affect and no, it is not being waged with bombs that fall from the sky, or projectiles fired from tanks nor ammunition that zing through the air, but the causalities are just as severe,  as children fall by the thousands as schools are closed and education and hope for a future is stripped from them. Water is turned off as a means to control them and strip them of dignity, while their homes are being taken, reminding them how little humanity means in comparison to profits. Neighborhoods die and people disappear and the ones that remain become targets no matter how still they be, hoping to be unnoticed by the trouble that surrounds them.

So come these individuals of no particular background, birthed by circumstance and often rage, that choose not to run, bow down or comply, but instead they resist, stand their ground, unify and push back in their refusal to not be heard, demanding respect for existence and fairness for the people. They make signs, form chains, scream chants, fists raised high while pounding pavement and bearing heat, wind, rain and cold, they keep long hours as they rally, educate, support and plan, not for recognition, reward or fame but simply for Justice for everyone.

These Activists now born face odds greater than themselves as they struggle to wake a sleeping people that they now defend against entities that do not recognize law or humanity unless it serves a purpose for themselves or profit, yet the activist is seldom deterred and pushes back nevertheless. Claiming each small step a victory. I never gave much thought to how an activist comes to be until that day an activist was borrn inside of me.

One thought on “The Birth of an Activist  ”